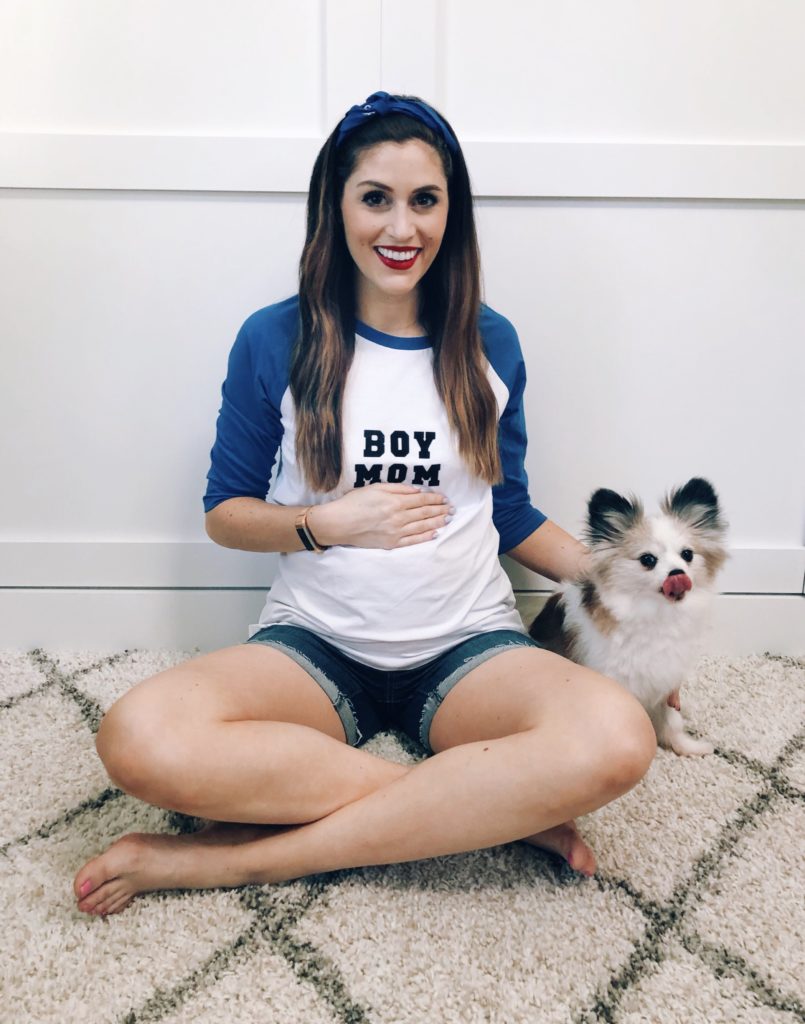 Baby Branciforte is a….

Deciding whether or not we were going to find out baby Branciforte’s gender was never a question for Michael and I. We both knew we wanted to find out. Neither of had a preference on gender, but we wanted to know nonetheless.

I had my first ultrasound at 7 weeks and the baby’s heartbeat was a speedy 179. I remember that I had heard an Old Wive’s Tale saying that faster heartbeats usually means a girl and left my appointment wondering if my first born would be a little girl. But for some reason, I always had this underlying feeling that the baby was a boy. In my mind, I referred to him as a boy and even used the word “he” when talking about the baby to Michael. I actually even joked that the baby was probably a girl just because I THOUGHT it was a boy.

Both Michael and I thought we wouldn’t be finding out the gender until at least week 18. But, at our 13-week appointment, the ultrasound technician asked if we were going to find out the baby’s gender and we told her we were. She said the baby was “showing off” and she could take a look. She told us she was pretty sure we were looking at a little baby boy on the screen. She reiterated she couldn’t tell 100% at only 13 weeks, but made it clear she was pretty darn sure. A blood test at 14 weeks confirmed that baby Branciforte was a boy! 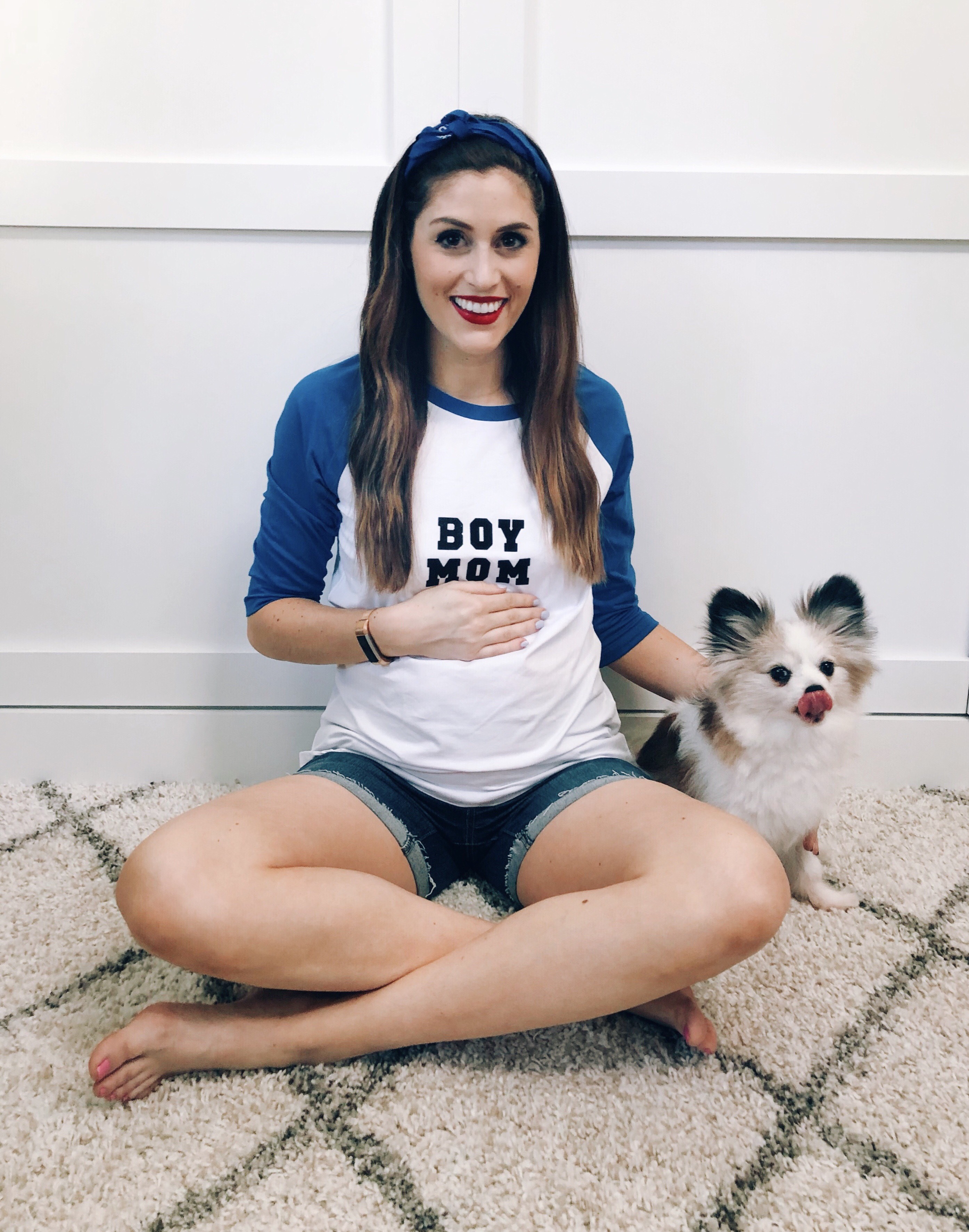 Like I said, neither Michael or I had a preference of boy or girl when we found out we were pregnant. As cliche as it sounds, we honestly just cared that our baby was healthy and the pregnancy was healthy. But, now that we know the gender we both keep telling each other, “I’m so excited it’s a boy!”

Deep down, I’ve always pictured myself as a “boy mom,” and I think some intuition in me knew that’s what he was. I’m so excited to raise a little man!

In case you missed it, we officially announced the baby’s gender in this week’s YouTube video. I actually tested a ton of Old Wive’s tales for gender prediction to see if they could correctly guess our baby’s gender. You can watch it here to see if they did.

The only bumpdate I’ve done so far was for the first trimester, so I thought I’d give you all an update on where this pregnancy is!

At 22 weeks, our baby is the size of a coconut and almost weighs a pound. 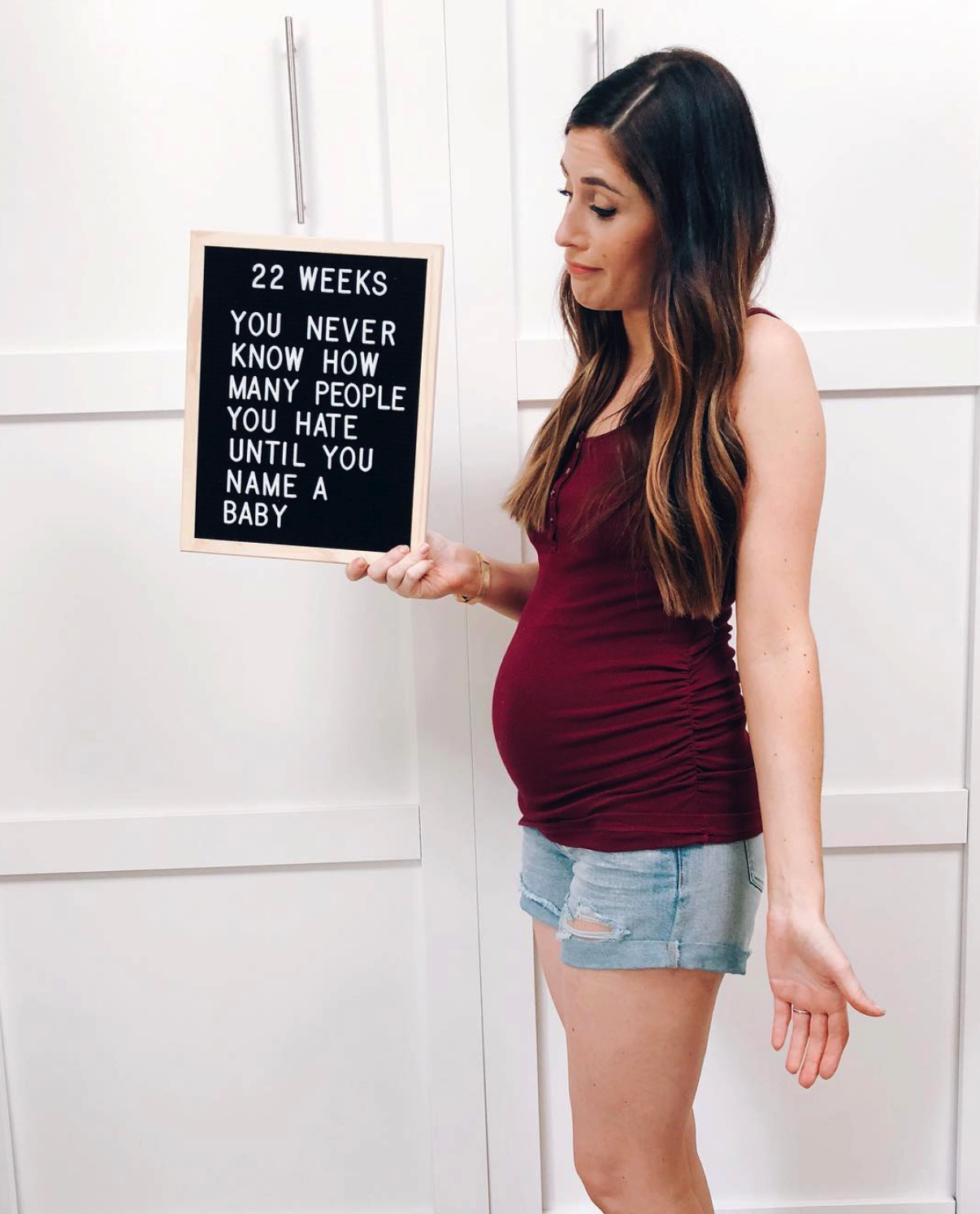 People aren’t lying when they say the 2nd trimester is the best. Once my morning sickness finally faded, I’ve had a pretty smooth 2nd trimester. I honestly feel great. I feel normal. Half the time I can easily forget I’m pregnant until I look down and see my bump or the little guy positions himself on my bladder and I suddenly have to pee.

Insomnia
Pregnancy insomnia is REAL. And, going off what I’ve heard from other moms, my insomnia is on the more “severe” side. I have some nights I spend pretty much the entire night awake. I average about 2-4 hours of sleep a night right now. I know it sounds horrendous, but it’s really not THAT bad. Most nights I get up and get work done or workout and I’m getting weirdly attached to my productive 2-3 hours in the middle of every night. The only time it really gets to me if I get two or three back-to-back nights of under 2 hours of sleep. For that, my doctor suggested Benadryl, which I use when I’m desperate and it does the trick. She also suggested Unisom, which is safe to take when pregnant and also often prescribed for morning sickness.

The one perk to insomnia that some other moms have told me is that is makes less sleep once the baby is here easier. Some moms who had insomnia as bad as me told me they actually slept BETTER after the baby was born.

If you’re curious about some of the ways I’ve been fighting insomnia, I wrote a whole post on all-natural remedies for insomnia.

I wouldn’t say my cravings are all that crazy. I do crave pickles all the time, which makes me feel like the most stereotypical pregnant person ever. But, I do. I buy about 2-3 jars everytime I’m a the grocery store. Recently I’ve also been craving a lot of fruit, mainly green apples, blackberries, and raspberries. 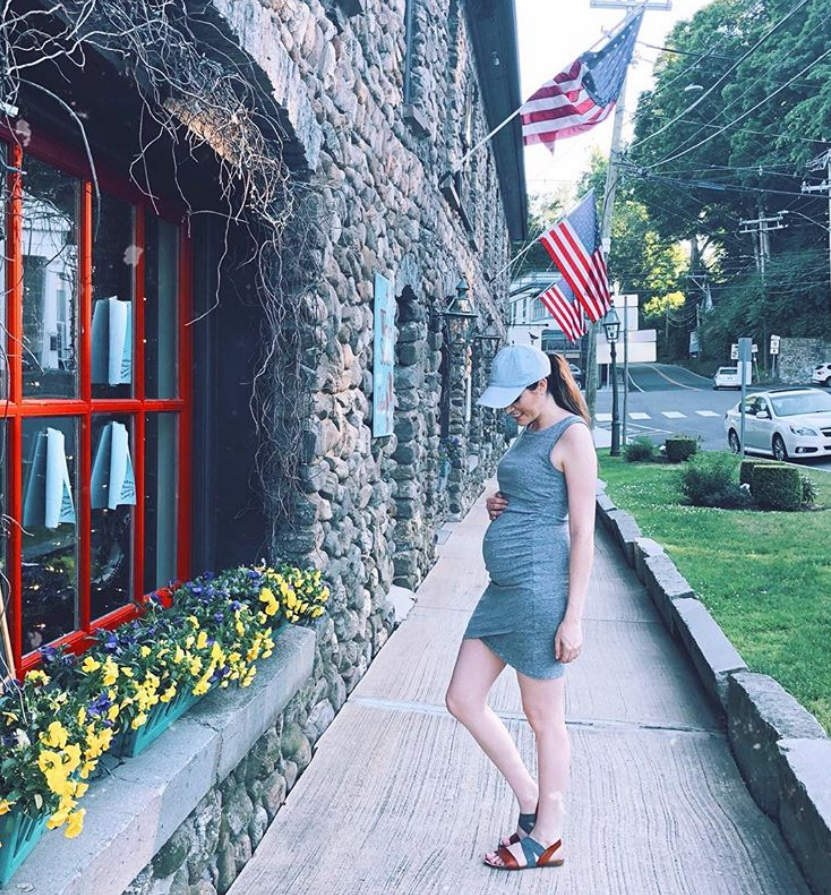 Besides this growing bump, the past 4 weeks haven’t been all that different as far as changes to my body. I’m definitely learning to adjust to my body carrying a baby. It’s summer and I’m used to tucking a tiny tank top into my cutoff jeans and running out the door which just doesn’t happen in maternity shorts. Just like everyone says, it’s an adjustment appreciating and loving your body when it’s growing a baby. I have a post planned all about body image with pregnancy I plan to share soon.

On top of that, I totally underestimated how long I’d be able to squeeze into some of my normal t-shirt and tank tops. I thought I’d be able to make my “normal” clothes last longer but besides some of my dresses, I live in pretty much exclusively all maternity tops at this point. My go-to are the Old Navy maternity t-shirts and tanks. If you watch their website, they typically go on sale at least once a month. I’ve snagged most my tops up for about $6-$10.

Feeling Baby Move!
I felt the very first flutter of the baby move at 17 weeks and by 19 weeks I could feel him every day. Everyone feels the movements at different times depending on your body and the placement of your placenta. Some people can feel it earlier and others not until much later. Now, just entering week 23, I feel the baby moving all the time. He’s most active at night after dinner. The most exciting moment was at about 21 weeks when Michael was able to feel him move for the first time. It was so exciting to share it with him.

Picking a Name
Michael and I were back and forth between two names at the beginning of the pregnancy but we’re pretty sure we’ve picked the one! We’re keeping the second one as a runner-up just in case, but I’d be lying if I said we haven’t started occasionally calling the baby by the name we picked. We’re not sharing the name before he’s here. I got a lot of good advice from all of your on Instagram that not sharing it is best because then you don’t have to worry about other people’s opinions on it. Choosing a name is hard enough, but if you get too many opinions you’ll never decide. It’s like bringing too many people wedding dress shopping!

Registry done!
I finished our registry this week since our shower invites are going out. It feels very conclusive to have that step done. We’ve not bought a single thing for the baby as of yet. I think once some items start coming in it’s going to start to feel even more real. We’re planning to start the nursery at the end of July or early August.

Pregnancy classes
On the suggestion of our OB, we’ve decided to sign up for 3 pregnancy classes and we scheduled them out between now and September. We’re taking a Labor and Delivery class, a Breastfeeding class (this was highly recommended by our OB), and a Newborn Care class.

I almost didn’t opt into the Labor and Delivery class because I was afraid it might just freak me out more than necessary. But, I talked to some other new moms and most of them recommended it. They cover basics and usually walk you through where to go in the hospital etc. One of our friends also made the good point that the class was really helpful for her husband. As a woman, I feel like I probably know more about labor than Michael just because I’ve talked to friends about it in more depth than he ever would. And, when the time comes, most husbands feel a little helpless as there’s not a lot they can do during the labor. While the class will help both of us learn more about what to expect as first-time parents, I think it’ll also help ease Michael’s mind a little when the time finally comes.

That does it for this bumpdate! I hope you are all gearing up for a nice relaxing 4th of July weekend! We have in-laws coming to visit and I’m very excited!