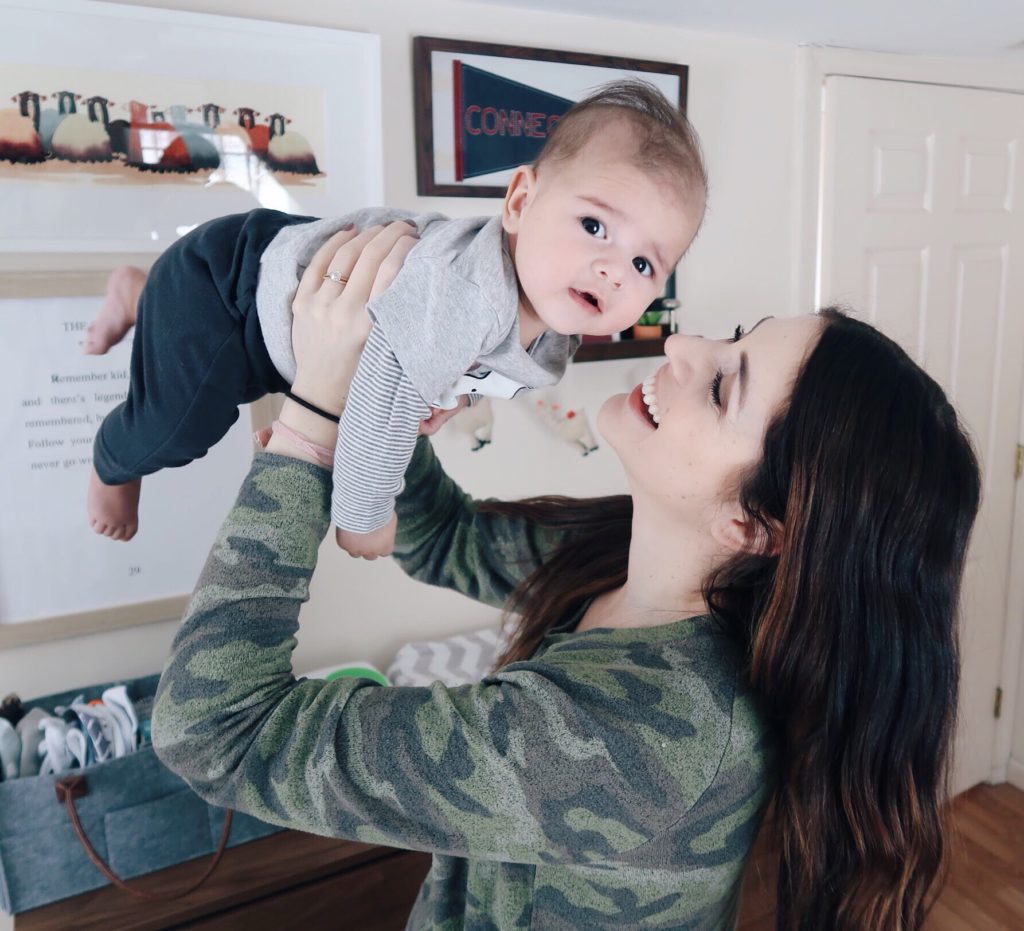 Baby Products I Never Used (and what I use instead)

Let me preface this post by saying this is a completely personal list. Everyone is different and every baby is different and every family dynamic is different. Certainly, the items on my list of things I never used might be something you used ALL THE TIME for your baby. Obviously, people use all different baby products and that’s why they all exist. This is just a list of products I bought or received and never (or almost rarely ever) used for baby Miles.

The sweet little mittens they make for babies are a great idea in theory. And, I know a lot of new mommas who use them. Especially because baby nails are basically a military-grade weapon. A very few times I remembered to grab his mittens before nursing so I didn’t end up with cuts all over my chest, but honestly… most of the time I just forgot these little pieces of fabric.

I never used them because I either forgot or they were just too much of a hassle. On top of that, Miles started self-soothing with his hands around 7 weeks, so having his hands covered most the time after that was never a good idea because he’d put his hands in his mouth in place of a pacifier.

What I use instead: I found opting for Sleep n Play outfits that have the mittens built in were 1,000x easier. My favorite are the ones from Cloud Island at Target. They are great because they have the built-in mittens at all baby ages, not just the newborn sizes.

Ok, it’s not that I NEVER used baby socks. But, for the number of socks I was gifted, I didn’t use them that often. Miles has busy little feet so he constantly kicked off socks. They lasted 5-10 minutes and were off. The same goes with newborn shoes, we never used them.

What I use instead: I ended up getting a few pairs of these Hudson Booties and haven’t looked back. They might not work until your baby is maybe 10lbs, but they stay on and Miles almost never kicks them off. Another option are the Zutano booties. These are a little more pricy but actually stay on just a LITTLE bit better. I also like that you can get the Zutano booties in multiple fabrics while the Hudson booties only come in fleece.  If you follow them closely, they do put them on sale.

I also used Sleep n Plays a lot for Miles because then I just didn’t even have to worry about footwear of any kind.

I’ve said it once, I’ll say it again, baby nails are no joke. They are thinner than paper and sharper than a knife. They grow in strange, jagged shapes. I just DON’T get it. I made sure to register for a baby nail clipper set since I knew I’d need to tend to Miles’ nails pretty soon after birth. But, with his tiny little fingers and the fact that he’s always moving his little hands around, I haven’t ever felt all that comfortable trying to clip them. Instead, I opted for filing, which was so much easier!

What I use instead I used the Baby Frida nail files for a while and they are effective and super easy. However, I found they still couldn’t get the nails all that smooth and Miles was scratching the heck out of his face! He looked like he slept with a cat every night. Finally, one of you suggested I get this little battery-operated nail buffer and I haven’t looked back. GAME CHANGER. They file his nails but also buff them so much smoother! He’s barely scratched himself once since I started using it.

So, the product I’m talking about isn’t the sleep sacks, but more the sleep n play style pieces that were long to the bottom with a little elastic on the bottom (like these). Firstly, Miles always slept swaddled so these never worked for sleeping. Next, I thought they’d be so easy for diaper changes, but I honestly found them kind of difficult to get on and off with the elastic bottoms. Lastly, because they don’t have legs he couldn’t wear it in his Rock n Play (which he was in a lot as a newborn) or in his car seat (so he couldn’t go out in them). Basically, Miles didn’t sleep in them, travel in them, or really wear them for hanging around the house so I found them pretty pointless.

What I use instead: Miles LIVED in his Sleep n Plays. I found these to be so much more versatile. He could sleep in them, go out of the house in them, lay in his Rock n Play with them, etc. And, they are SO simple for diaper changes -I suggest ones that zipper up from the foot, or button up around the legs. I also suggest you get ones with built-in footies so you don’t have to even think/worry about socks. Again, I love the Cloud Island ones which zipper from the bottom and have built-in footies and mittens. Old Navy also makes some great ones but check them before you buy them because they don’t all zipper from the bottom. I also really like the Burt’s Bee Baby footie pajamas, they are amazing quality!

I didn’t actually buy this, but I did get a sample of it at some point. When I first started washing Miles’ bottles (which happened earlier than I anticipated if you read my breastfeeding journey), I was so cautious to use the wrong thing. I whipped out the sample of special “baby” dish soap. But, when it ran out I realized I probably didn’t need something quite so niche.

What I use instead: Instead I just buy a clean/green dish soap free from dyes and the other bad-for-you chemicals. That way I’m using the good stuff for Miles and for the rest of the family!

During our breastfeeding class, the teacher mentioned a manual pump and it seemed like a really smart idea. They are only like $20, so I picked one up. While I did use it a couple times when I was in a total pinch, I didn’t find it all that necessary. I know a lot of women use them, but for me having to pump one breast at a time took forever and I never got nearly as much breastmilk as I did from an electric pump.

What I use instead: Obviously, my electric pump. For me, it’s far more effective at expressing breastmilk. I have the Spectra S2. I also purchased a Haaka which I don’t use a ton, but if I’m extra full I can pop it on one side and it just does its thing without me having to sit there and pump. It doesn’t get a ton, but it helps get letdown and relieve tension if you’re overfull. It’s good to use on one side while the baby eats on the other, too. I would opt for a haaka over a manual pump if I were to pick just one, personally.

If you read my breastfeeding journey, you know that I had to start supplementing Miles with formula in his very first few days of life until he was about 2 months old. I always knew I wanted to breastfeed and didn’t even really consider having to formula feed so I was pretty unprepared when it came to tools and products. My Lactation Consultant had some premixed formulas in 2-ounce bottles which I thought was such a smart idea! If I was ever out and about with Miles, I could use one of these instead of having to worry about mixing formula. We purchased a box (the only size you could get online) which came with something like 36 bottles. I used maybe 8 and now I have about 28 bottles of infant premixed formula I can’t use.

What I use instead: Honestly, mixing formula really wasn’t all that hard. And, you can mix it ahead of time and as long as you keep it cool with an ice pack it’s good for 24 hours. Plus, by the time Miles was 2 months we were pretty much off formula altogether. So, for our feeding journey, they really weren’t worth it. If you do need to mix on the go, I found just putting formula in a dry clean bottle worked fine and then I’d bring a bottle of water with me and mix it right before I fed him.

So, I had two baby carriers for Miles, a wrap and a carrier. We used our regular carrier ALL THE TIME and I still use it to this day with Miles who is now 18 months (we have this one). I loved the idea of also using a wrap-style carrier as well. It’s way more snuggly and comfortable for both me and Miles. But, the truth is, getting it on and off just took too long and so I used it way less than I could have.

What I wish I had instead? I wish that I had opted for a ring sling carrier instead of a wrap because they are just SO much quicker. You can bet baby #2, if and when there is one, will be getting a sling.

UPDATE 1/20/22 – I wanted to come in and add a note to this now that I’ve had my second baby. I actually did use my wrap carrier with my second baby a lot more, she didn’t care for a traditional carrier at first. Every baby is different. So, while we used our traditional carrier MORE, I did really like having the wrap, too. We also bought this newborn carrier, designed specifically for newborns to 12 months and it was a game-changer for the first 6 months. SO easy to put on and way more secure and comfy for little newborns. We also DID finally get a ring sling (I went with Wildbird), and I did really like it, the ease of putting it on was quicker and great for quick carries once she outgrew the newborn carrier.

I purchased a pregnancy pillow that also claimed to be a nursing pillow. I figured kill 2 birds with one stone – what a great idea, right? Problem is personally I hated the pregnancy pillow for sleep during pregnancy. Then, when it came time to nurse, it was about 100x too big to lug around with me to nurse with.

What I wish I had instead: I wish I had skipped it altogether and gotten a Boppy. I kinda assumed I didn’t need the Boppy because I could just use regular pillows to prop Miles up while he nursed, which I could, but the Boppy also works really good as a baby lounger too. It’s just more versatile and I know I would have used it A TON if I had had it.