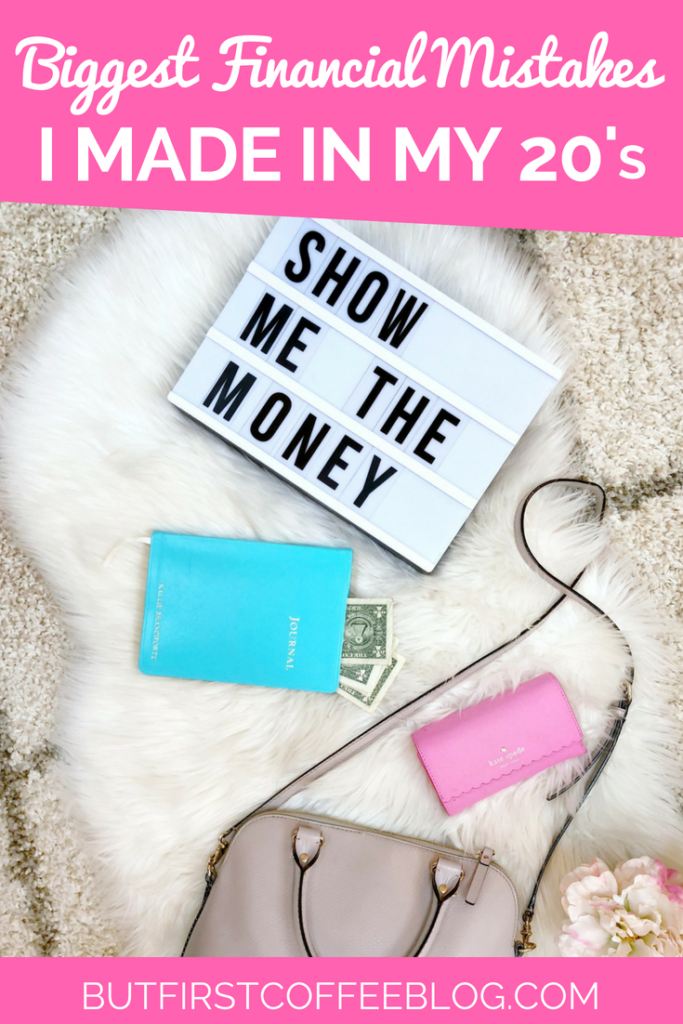 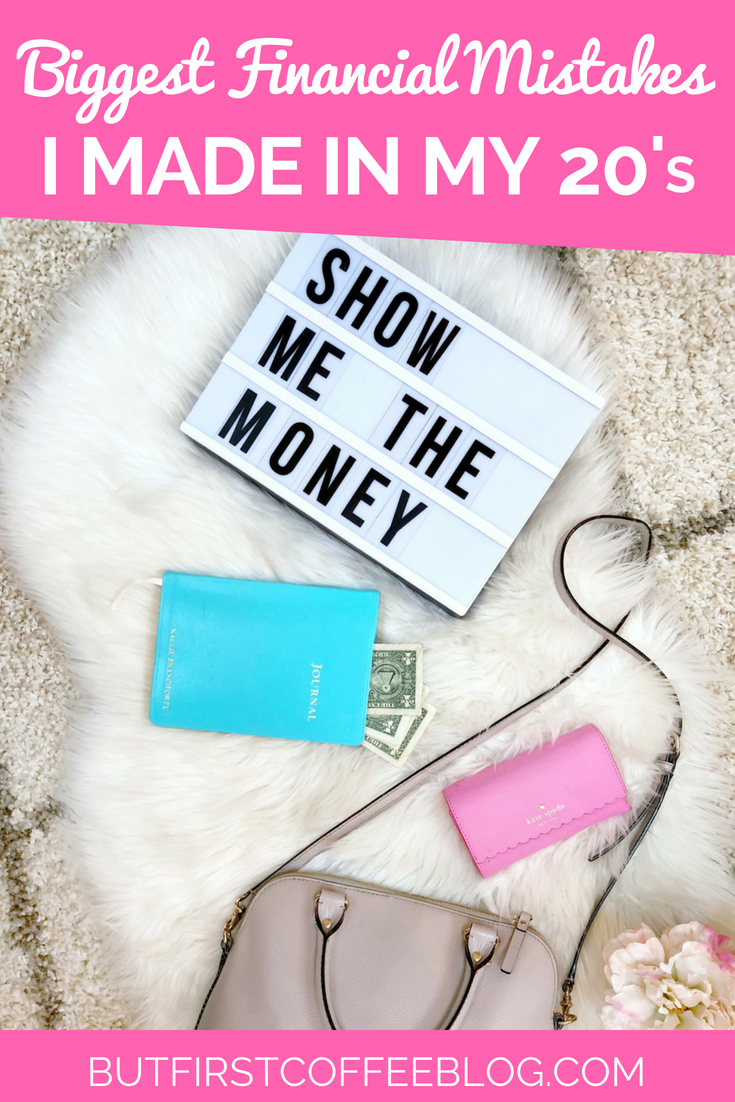 We make a lot of mistakes in our 20’s. It’s sort of what the 20’s are all about, right? Making mistakes, learning life lessons. I certainly learned a lot in my 20’s thanks to mistakes I made – whether it was that jello shots are almost never a good idea or that sunscreen almost always is a good idea.

Today, I wanted to focus on the money mistakes I made in my 20’s. I’m reflecting on the biggest financial mistakes I made, and what I learned from them, and what I do now that’s a lot smarter. It definitely took making these mistakes for me to get to where I am now, a place where I feel financially smarter (and safer.) I make better money choices and have learned to rid bad financial habits.

A Huffington Post article explained the issue with fast fashion best when they wrote, that the fast “fashion industry is churning out 52 “micro-seasons” per year. With new trends coming out every week, the goal of fast fashion is for consumers to buy as many garments as possible, as quickly as possible.

I definitely fell into this hamster wheel at times. I bought trendy, fast fashion pieces I wore only a few times before I donated it away. #IDidItForTheInsta (right?) They were a complete waste of money and they cluttered up my closet. Now I buy classic pieces that flatter my body that I can wear year after year. I focus on quality pieces that I know will look good on me. It not only keeps my closet more organized but also makes choosing what to wear in the mornings easier too because everything in my closet is something I like that fits me well.

2. Not looking at my monthly or weekly spending

This might be the worst of the worst when it comes to financial mistakes I made in my 20’s. I would spend without looking back at how much at been spent. How am I supposed to learn from my spending habits, realize if I’m overspending in some areas, or follow a successful budget if I don’t even know how much I’m spending each week? This can be a common mistake especially if we know we’re overspending. It’s sort of an “out of sight, out of mind” mentality that if I don’t look at what I spent it doesn’t have to be real.

I learned if I wanted to really budget, save money, and pay off debt, I HAD to know EXACTLY where my money was going every week. Not just how much I spent, but how much I spent in each category week after week. It allows you to analyze places where you’re overspending and places you can cut costs.

3. Constantly increasing my means with my income

This is a little something called lifestyle inflation. From our early 20’s to our late 20’s, most of us make some strides in our annual income as we grow in our career. A big mistake is just inflating your lifestyle to match this new income, instead of using the new income for smarter things.

Of course, some normal lifestyle inflation as your income increases is OK. For example, when Michael and I first moved into together we had a very limited budget for groceries. We ate a lot more budget-friendly foods (which usually meant processed). As we each got careers and a real income, we were able to start eating more local, fresh, and whole foods.

Some lifestyle inflation is normal and should naturally happen. But, what you want to avoid is spending away all of your increased income. It’s easy to fall prey to this. As your income increases, you buy yourself nicer things, go out to eat more, move to nicer places, etc. While some of this is fine, the mistake I made (and many others do) is inflating your lifestyle 100% to match your increased income, instead of taking some of that money to do things like rapidly paying off student loans, maxing out retirement, investing, or saving.

Speaking of retirement, not contributing to one in my 20’s was a big mistake. The minute you have a job that offers retirement benefits…take them (or sooner if possible). Don’t wait “until later.” It’s hard to see the value in this money seeping from your paycheck every week, but it’d be a hard lesson to learn when you’re retirement age without enough money put away to sustain yourself. The amount of people who reach retirement age and don’t have enough put away is staggering. If you put away from every paycheck you won’t even miss that money and you’ll be setting yourself up for the future.

Oh, the one-and-done item. How I don’t miss you AT ALL.

What are “one-and-done” items? These are items you bought for a single event that you’re never going to use again. Try that trendy unicorn pool floatie you bought that one time even though you don’t have a pool, or know anyone with a pool. Come to think of it…you haven’t even been in a pool in 3 years. Or how about those cute 4th of July themed plates you bought an entire set of for a July Fourth party you had at your house. Now you have patriotic plate set that you literally have no other use for except one day a year. They are just little items you buy for a single occasion. Whether it’d look cute in a photo or you’re using it for one event.

I’m guilty of buying SO MANY pointless one-and-done items. They were a total waste of money and a clutter-collector at my house. Good riddance.

6. Not living with a budget

I talk about this a lot in my post all about how I FINALLY created a successful monthly budget and stuck to it. But, for so many years I lived without a budget. Or, I lived with a budget that wasn’t truly successful, meaning I’d stick to it for a week or two and then forget all about it. So, learning how to create a successful budget and then STICK WITH IT was one of the most valuable lessons I learned.

It really came down to first understanding exactly where my money was going, finding places I was overspending so I could cut back, and then giving myself reasonable budgets for individual categories each month. Read my entire recipe for success on a successful budget here.

7. Buying a new outfit for every event that popped up

Saying that I bought a new outfit for EVERY event might be a little bit of an exaggeration, but I remember buying new dresses for every wedding or thinking I needed a new outfit or every event. You get caught up in the worry of “well I already wore that,” or “they already saw me in that.” But who do I think I am, Mariah Carey on Cribs? Let me tell you something, I rarely remember what someone wore to a wedding last year which means no one is going to remember what I wore.

Like with the idea of fast fashion, I’ve instead swapped a ton of “eh” pieces out for a few pieces I really love. I have about 3 dresses I rotate out for weddings and 3 or 4 go-to night out outfits per season. Not only does it make the dreaded “what am I going to wear” question a lot easier, but it makes my closet easier to organize and my wallet a lot happier.

8. Getting caught up in the lure of “deals”

Ever see something that’s such a good deal you just gotta have it even though you totally don’t need it at all. Yea, guilty.

I definitely made this mistake one too many times. Whether it is a great deal on some shoes, a purse, an item for the home…I’ve stopped myself from getting sucked into the allure of the “deal.” Just because somethings a great deal doesn’t mean I NEED it. Now I prescribe to the idea that I’d rather spend full price on something that I really need/like rather than end up with 5 items I don’t need/want because they were on sale.

9. Waiting too long to actively pay off debt

Yas, preach, YAS! Your 20’s can be debt accumulating. Student loans, car payments, and credit card debt are all often racked up while you try to make it through adulthood. For too long I was complacently making my minimum payments on these debts and barely seeing them decrease year after year. And, let’s not even get started on the money I was wasting on interest. When I finally set myself a successful budget (see #6), paying off these lingering debts was part of it. I didn’t want loans or bills sucking away my monthly income.

And, by using my successful budget technique, I actually found that paying off the debt wasn’t as hard as I thought it would be. For so long the debts lingered over my head and I didn’t think I had enough wiggle room in the budget the pay them off. But the truth was, I just wasn’t willing to look closely enough at my budget to find places I could easily cut back from so I could pay down the debt. Once I had an active method to pay it off, I was able to pay off about 80% of my debt in under 9 months.

I have a feeling this is something many of us are guilty of. We fear being bored or spending a weekend at home with nothing to do. So, we use our money to cure this boredom. We go out to eat, attend every event, go shopping, etc. This can also be one of the BIGGEST money sucks there is. I know it was stealing tons of money from our income every month. The key here is first learning to accept and embrace boredom instead of being scared of it. Once you realize it’s OK to stay home sometimes you learn to enjoy and love doing things that don’t cost you money. You can stop using your credit card to cure a night of boredom.