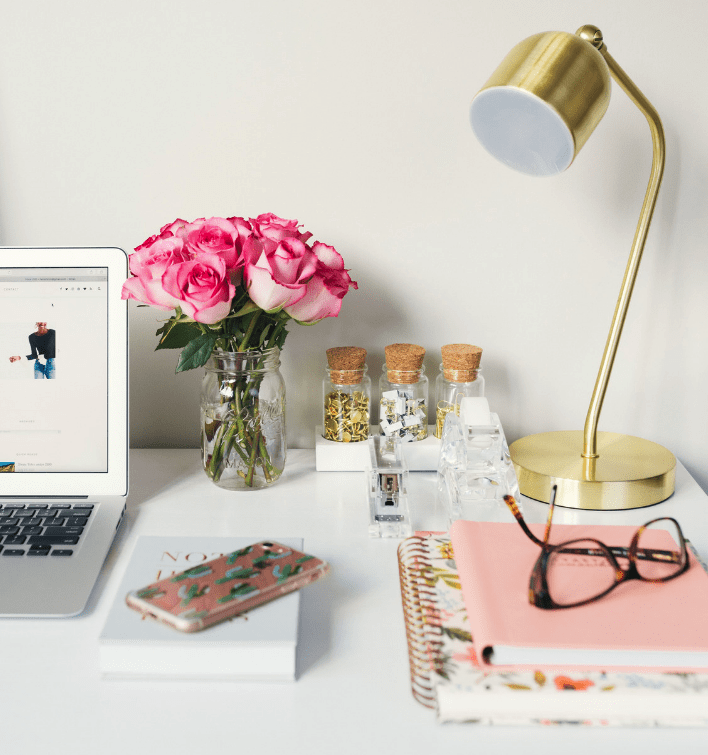 I’ll let you in on a little secret about myself: I hate clutter. Now, I’m not a minimalist by ANY means. If you walked in my house on any given day you’d see books on the coffee table, tons of art on the walls, and a small stack of shoes by the front door. My kitchen drawers are packed with all the kitchen essentials and most every hanger in my closet is full. If it’s a particularly busy week you’d see a pile of folded laundry yet to be put away, a stack of crafting supplies on the table for whatever DIY I’m working on, and some broken down Amazon boxes that haven’t found their way out to the recycling bin. Listen, I’m not against having stuff in my house. I believe if it’s beautiful or useful, then it has a place in my four walls. That’s why I rarely have blank walls and keep two extra large Tupperware containers in my attic for all my crafting odds-and-ends.

However, there is a kind of clutter I hate and that’s pointless clutter. The stuff that just kind of piles up because you don’t really need it but you’re not really sure if you should get rid of it. I’m talking about unanswered mail, a box you might use to ship something sometime, extra beauty samples you received but might never use, old magazines, the plastic handle that you know goes to something but you’re not sure what. Or, the kind of clutter that is maybe useful, but you just haven’t gotten around to organizing and putting it away so it just sort of stacks up in the extra bedroom. This is the kind of clutter that drives me crazy.

I’m sure I”m not alone. I think the average person hates unnecessary clutter. But, the problem is it seems to just slowly accumulate over time so that you barely realize it exists until all the sudden your spare bedroom has a pile of boxes and stuff in the corner. Then, every time you walk into the said spare room you shudder at the thought of decluttering. It starts to feel overwhelming. When will you have the time?! How long will it take?!

Luckily, decluttering doesn’t have to be overwhelming. There are some little tricks you can use to easily tackle that clutter once and for all. And, I’m also going to share some simple tips for preventing the clutter from accumulating again in the first place. 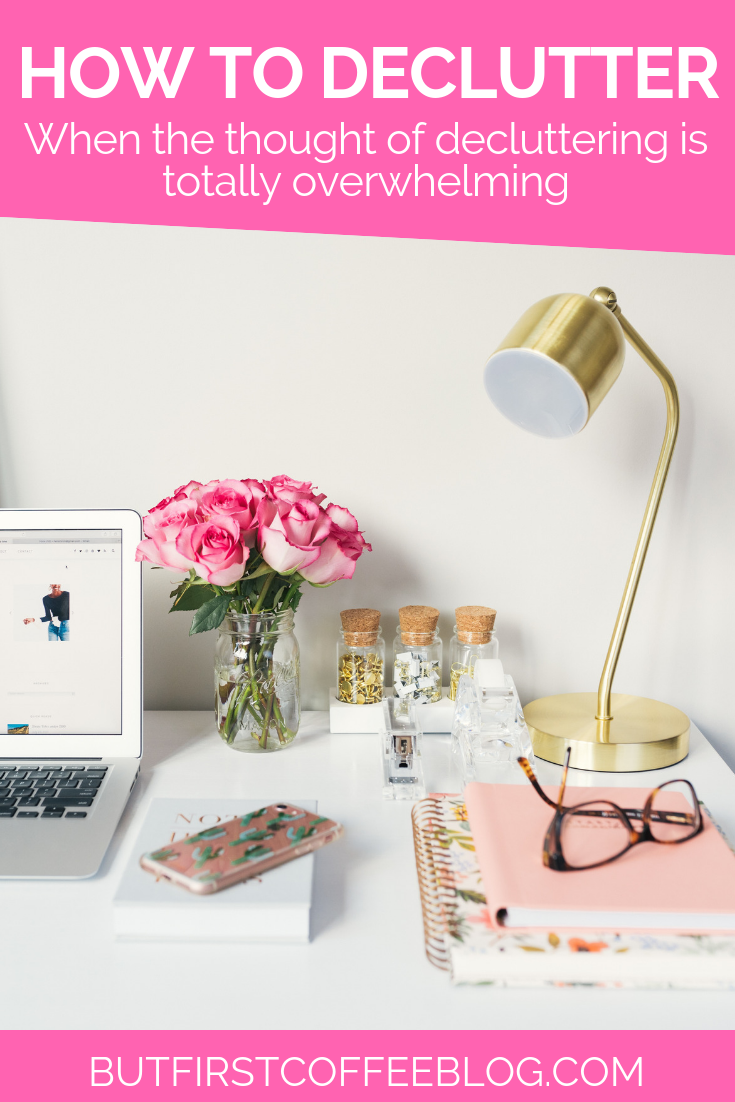 You have TOO MUCH clutter to tackle in one day

You might think you need to set aside an entire weekend to “just organize,” but the truth is doing this just sets you up for failure. Very few people have the stamina to clean and declutter and organize for 8 hours straight. Trying to do that will likely just lead to you giving up 3 hours in, defeated and even more frustrated than before.

Instead, focus on one project or space at a time – and make a point to complete that task completely. Doing this sets you up for success and gives you a feeling of accomplishment and motivation that you’ll be able to tackle the rest. Focus on projects that just take 1-3 hours at a time and spread them out over a series of days or weekends.

This is a great way to get a jump-start on decluttering. If you have a space or room that really overwhelms you when it comes to organizing, start with really little spurts. Set an alarm for 10 minutes and just do whatever you can in those 10 miuntes. Maybe it’s throwing out things that are trash, organizing ONE small pile, or taking a few things and putting them away where they go. When the alarm goes off, you’re done. Come back again in a day or two and do the same thing.

This method also works really well if you’re really busy and your current excuse for not decluttering is “I don’t have the time for this!” I’ve definitely had areas of my house that needed to be tended to that I avoided for days (or weeks let’s be real) because I just “didn’t have the time.” But, I’ve found by just taking little spurts of 10 minutes or so, I can usually get it taken care of a lot quicker than I thought as opposed to avoiding it day after day.

You have a hard time parting with things

A lot of people have a hard time parting with thinks, but think about it this way: If you hold onto everything (or too many things) because everything is “special,” then nothing is actually special. If you put special meaning on every item, then they all start to be a little less special.

Obviously, the first step is learning how to decipher what’s really special and what is something you can part with. I like to think about these questions:

Use the Maybe Donate Box Test

This is a great trick not only for those people who have a hard time letting go of things, but also to help you decide if you really need something. Get a large cardboard box and put it somewhere out of the way: a shelf in the garage is a great spot. If you have some things you are considering getting rid of but are worried you might still need them, put them in the “maybe” box. You can put things in here at any time. Then every few months revisit the box. If there are things in there from 3-4 months ago, you can bet you probably don’t need them. They’ve been sitting away in the maybe box all these weeks and you haven’t missed them yet. Then, every once in a while take that box, pop it in your car, and drop it at the Goodwill.

This trick works great with kids, too. Sometimes they can have a hard time parting with toys just like we have a hard time parting with things. If you have them put it in the box as a test, you’ll usually find that they’ll forget all about it in a week or two. If they DON’T and want the toy back, then they can have it. But, all the items they forgot about can get donated.

Prevent Clutter in the First Place

If it takes less than 2 minutes…do it now

One of the ways clutter builds up is because it’s just a lot of little things that get left out over time. It’s a little pile of papers here, a group of odds and end there. A simple thing to do that will help keep your house clutter-free is to prescribe to the rule that “if it takes less than 2 minutes…do it now.”

How many times have you walked past that little pile of things that need to go to the basement without taking the 60 seconds it takes to walk them down there? If you adopt the 2-minute rule, you’ll find yourself taking care of a lot of little things on a daily basis that would likely become clutter.

Use the “one thing in, one thing out” rule

This is a simple rule you can adopt for places like your kitchen, closet, kid’s toy room, and other areas that generate clutter. It’s the simple idea that if one thing comes into that area, one thing has to go out. If you buy a new shirt, you need to donate or throw away one currently in your closet. If your kid gets a new toy, they need to donate one. Seems simple enough but it helps you from overwhelming certain areas in the house that easily accumulate. I have also talked about this trick as a way to decrease overspending as well, because it usually makes you double-think a purchase if you know something currently in the house has to leave to make room for this.

Actively remove things from your house (or organize it)

Stuff accumulates. It just does. So, at the end of the day, one of the simplest ways to avoid too much clutter is to actively get rid of things you don’t need – or avoid them all together. If someone offers you something don’t feel inclined to take it just because it’s free or you “might” use it. If you get a gift you know you’ll NEVER use, don’t let it sit around just because it was a gift. Reconsider every purchase by asking yourself if you REALLY need it and WHERE will it live in your house?

Also, get into the habit of getting things out of your house or organizing it as it comes in. Every day I take our mail and either recycle it or take just the most important papers (bills to be paid, etc.) and place them in the office. Every few months when I put away my laundry I check to see if there are any items in there I no longer want/wear/need – things that don’t make the cut get donated. I unpack Amazon boxes and soon and they arrive and break down the boxes immediately to avoid the products and packaging from piling up. A lot of these little things match the “if it takes less than 2 minutes…do it not” mentality.

I hope some of these decluttering tricks help you! I know that when I follow these rules myself, it’s a lot easier to keep my house clutter-free. It’s easy for little things to accumulate and become overwhelming. So, these are the methods I use to tackle those piles of clutter AND what I do to prevent more in my house.