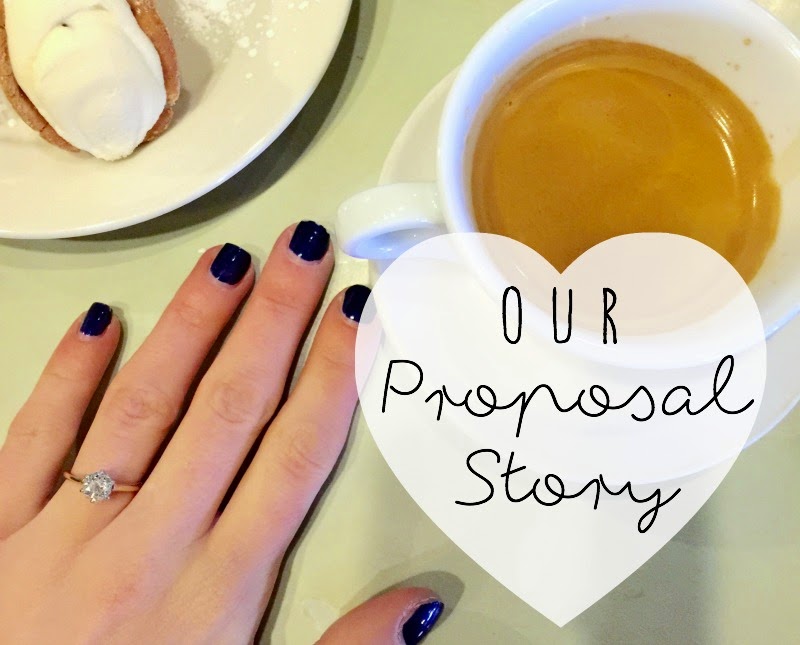 I have to start this post with the biggest, most sincere thank you.  When I shared that I was engaged on social media your congratulations and well wishes BLEW ME AWAY.   I’ve never felt so loved and supported.  I tried to respond to as many of you as I could, but I was honestly overwhelmed. So thank you for making me feel even more special than I already did!
Michael, my now fiancé (which I will never adjust to calling him), out did himself a thousand times over.  I used to tell him I didn’t care how he proposed as long as it, “wasn’t in a restaurant and the ring wasn’t tied to anything.”  Neither Michael nor I are romantic by nature and so I never pictured or envisioned an over-the-top proposal.
Friday afternoon we set off to New Haven to,  as far as I knew, meet his parents for a late lunch.  When Michael “missed” the exit, I rerouted on my phone telling him to get off the next.  He “missed” again.  When he “missed” the third exit I was clearly suspicious.  “Are you purposefully trying to miss the exits?” I asked.  Michael responded by plugging in his iPhone and playing a playlist of New York City themed songs he’d created. “We’re going to New York City for the whole weekend,” He finally told me.
I asked a thousand questions on the drive into the city. “What am I going to wear? Did you pack me makeup? Where are we staying?”

Michael had, without me knowing, packed my entire suitcase and makeup bag and snuck it into the car.  Seen above is the makeup Michael packed for me, which was adorable because he said he re-watched my YouTube videos to know which things were my favorite! He missed a few items, but there are always drugstores around.  We arrived into the city, had a coffee, and walked down to the lobby.
Another surprise.
My dad and step mom were sitting in the bar! Now, it is justified to think I was even more suspicious as this point, but it’s also my birthday week so I wasn’t totally sure.  At this point I’d given up complete control and was just going with the flow.

We had a cocktail in the hotel bar, we were staying at the infamous Empire Hotel. Manhattans for the men and prosecco cocktails for the ladies.  After happy hour we decided to split ways to get changed because Michael said he made dinner reservations for us all.

Back up in the hotel room Michael had another surprise up his sleeve, he’d bought me a new dress to wear to dinner.  It was a dress I’d seen on Lulu’s and was, oddly enough, called the “Big Night Out,” dress.  I got dressed and unknowingly took my last selfie as a “single” lady.

Like I said, we were staying at the Empire Hotel, and at the top there is a little bar up by the famous sign. We took the elevator up and walked out onto the terrace underneath the sign, overlooking Lincoln Square.  It was just the two of us and that’s where Michael got down on one knee and asked me to marry him.  I honestly couldn’t believe it. He totally surprised me.

We’re engaged!! After the shock that this had really just happened sunk in, my stepmom and dad appeared and we had a congratulatory toast looking over the square.  Then we went out to continue celebrating.

For dinner Michael had made reservations at Anassa, a modern Greek place which was to die for.  We ended dinner with Greek coffee and baklava, then popped over the Bemelmans Bar, part of the Carlyle Hotel, a famous bar in New York City.  We saw Christine Brinkley there and apparently missed Sir Paul McCartney by 5 minutes.  Dang, maybe next time, haha!

When I woke up the next morning, the surprises were apparently NOT over, I just didn’t know it yet.  We spent the morning getting espressos in Little Italy and shopping on Broadway.  We even found ourselves in a re-opening of a Madewell that was serving complimentary mimosas.  Well, wasn’t that convenient?
Around 4 we got in a car headed for Brooklyn.  Michael and I both love Brooklyn and I’d never been to the brewery before.  When we arrived there was a line all the way down the building to get into the brewery and I was ready to say, “forget it, but Michael told me he’d “called ahead and gotten us in,” and we cut the line.  We went to get chips for beer and I was greeted by my final surprise: Michael had invited a ton of our friends to meet us and celebrate!

Again, floored. I couldn’t believe Michel had planned so much and that my friends were willing to drive into the city and wait in the cold to get into that brewery to celebrate with us.  They’d arrived early, convinced the bouncer to let Michael and I cut the line, and reserved us all a seat.

The smug look on Michael’s face in this picture says, I just pulled off the best series of surprises ever.
We spent the night bopping around Brooklyn, getting pizza and Shelter Pizza and then going to some bar with an awesome video of Manhattan (it’s always good to know someone who lives in the city, isn’t it?)

The next morning Michael and I both had a craving for Bloody Marys, because, well, Sunday.  We found a place down in the Financial District called The Growler and meet back up with friends from the night before to try out the DIY Bloody Mary bar.

We tried to ignore the accumulating snow outside because those DIY Bloodys were just too tempting.  We later regretted it when it took us 7 hours to drive the normal 2 hour ride home.  But, it didn’t matter because we were still high on happiness from the best weekend of our lives.

Why New York City? NYC is a special place for Michael and I.  The summer we met, almost 10 years ago, I was living in NYC Monday-Friday because I was taking summer classes as F.I.T.  For our first Christmas, Michael surprised me with a trip to the city for a weekend and that following summer we visited a few times with family and friends.  When we got out first apartment together, Michael’s job had him going into the city every other week and I’d often go with him.  It was also a special city to my brother, and were we held a big party in his memory when he passed away.  It’s a city we both love and holds such a special place in our hearts. I’m so happy to have such an iconic place in the city we love as our engagement location.
The ring? As much as we all snicker at the “ring selfies,” we all want to see them, let’s be honest.  It’s like waiting to see the dress on the wedding day. Michael and I have been together almost a decade, so he knew what I liked, but the ring he found exceeded the expectations of anything I could have pictured in my mind.  The diamond and ring are over 100 years old, from the Edwardian Era, and the diamond was hand-cut. In the 19th century all diamonds were hand-cut, and so each diamond from this time is unique and no two cuts are identical.
Well, now that we’re engaged I’m faced with the absolutely exciting and also totally overwhelming prospect of planning our wedding, which will be sometime next Spring.  Any tips and advice are greatly appreciated.
Thank you again, for all the well-wishes and love. I plan on sharing some of the wedding planning process with you here, as well, so let me know in the comments what aspects you’d like me to share.

All items were purchased with my own money unless specifically stated or marked with an asterisk (*). And asterisk identifies a product sent to me for review or as a gift. I do not accept compensation in exchange for a good review. All thoughts and opinions expressed are my own.