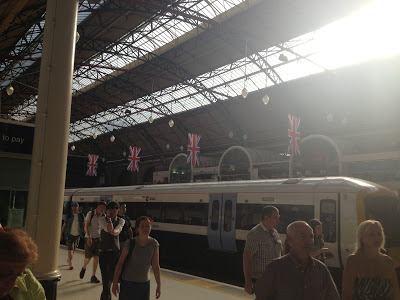 Travel | Our First Day in London

Ok, I know it’s been more than 2 weeks since I arrived back from my trip abroad and I’m STILL not done posting the pictures.  Just one after this and then, that’s all folks.
One week from our arrival in Paris we bid adieu to France and boarded the ferry across the English Channel.  We opted to take the ferry for a few reasons…One, we weren’t too keen on the idea of trekking back into Paris at the height of tourist season to cram into the train station to take the Eurostar. And secondly, the idea of bobbing about in the English Channel and getting to see the white cliffs of dover from the water seemed pretty appealing.  I was plesantly surprised by the ferry itself.  I mean, it’s not anything fancy, but I pictured the kind of ferries we take to Block Island or the islands off the coast of Maine, lots of uncomfortable seats and a concession stand offering candy and stale chips. But this ferry was more like cruise ship, complete with a cafe, arcade, food buffet, bar and lounge, and even a tiny little casino with 5 slot machines. Who wudda thunk for the short 1-1/2 hour journey.  Either way, we settled into a couch at the lounge and ordered a round.

Michael came back from the bar quite pleased with himself thinking he’d ordered us our first official English beer.  Why is there ice in our glasses? I wondered. I don’t know, maybe that’s just how they do it? He responded.
Nope, it was cider. After the initial disappointment that we weren’t drinking our first English brew dissipated we realized that this stuff was actually delicious.  Not too sweet like the hard cider we have back in the states.  Turns out the English make a lot of hard cider, and this was not my only taste during our short visit.
Once we reached Dover we boarded the next train to London, and finally got to enjoy our first English beer.

We stayed at the Abba Queens Gate Hotel, which was a great hotel with a prime location.  Not right in downtown London, but close to the underground, good food and good shopping.  It was certainly the nicest hotel we stayed at on our trip, and a little luxury was nice after all our travels.  The room was gorgeous and spacious and they provided every toiletry you could want- including these little exfoliating bath sponges which, I won’t lie, I grabbed two to take home with me because I loved them so much.

The entire time we were on the train we were dreaming of Bangers and Mash.  When the cabin fever of 3 hours in the car, 1-1/2 hours on the ferry and 2 hours on the train hit us, we even started singing a little song about it.  So pretty much immediately upon entering London we dropped off our bags and found the nearest pub.  Michael had himself another English beer, this time the real deal, a cask beer, served room temperature.  Pretty sure Michael is going to talk about his love for English beer the rest of his life.  I went for a traditional Pimm’s Cup.

It seemed like forever but the delicious concoction that is Bangers and Mash finally arrived at our tables. And it was a sweet, sweet sight.

The next morning we decided that buying a two day pass on The Original Tour, hop on hop off sightseeing bus seemed a good idea.  It was a little more touristy than I prefer, but it was kind of ideal for someone only visiting for 2 days. A bus showed up and one of the 60+ stops every 10-15 minutes and went along one of 4 routes.  We could use it to get anywhere we wanted and while it might have taken a little longer than the underground, it was nice that we could plug in our headphones and hear about the city as we travelled.

Our plan to was to end up at Carnaby Street, but we took the long way around so we could glimpse some of London’s finest.  I sadly had my camera on the wrong setting and was left with less than impressive shots of Tower Bridge and the Parliament with Big Ben.

We hopped off once at the London Bridge to walk around a bit, then jumped back on and got off near the Parliament to walk up to Piccadilly Circus.

I was happy to be able to snap a few more shots of Big Ben, this time with the proper camera settings.

Carnaby Street was a small block chuck full of shops: American Apparel, Cheap Monday, Miss Sixty, Muji,  etc.  We popped in and out of stores for a bit while working up a major appetite.

Michael has the patience of a Saint when it comes to letting me shop, but eventually the need for some food and beer came and we wandered off to find a Sunday roast.  Michael had met a pair of Englishmen in France and they told him not to miss a good Sunday roast.

En route to dinner we stopped for some more delicious English cider at a place called Nicholson’s Freehouse.

For dinner we chose The Wolseley.  It’s a beautiful and timeless restaurant on Piccadilly.  Built in 1921 by architect William Curtis Green as a showroom for Wolseley Motors the place was designed to be grand and extreme, displaying the Wolseley cars on marble floors.  Unfortunately the cars didn’t sell well and in 1927 the building became a bank and William Curtis Green was called in again to add offices to the front of the building.  It wasn’t until 2003 that the building was restored and opened at the restaurant it is today.

We sat in the bar, which was one of those offices Green came back to add in 1927.  The place was beautifully restored, it really felt like walking back in time!

We started with a cheese plate while we ordered another round of drinks.

And then came the big whammy.  I don’t really care for beef or pork, so I ordered a fish dish, but Michael was dying for a traditional English Sunday Roast and the Wolseley didn’t let him down. Everything was amazingly delicious and the service was superb.  Our favorite employee was the doorman, who is the one who convinced us to go inside in the first place.  He insisted on flagging us down a cab at the end of our meal and we were whisked off back to our hotel.  Later that night Michael and I headed out for a little night on the town, but the camera stayed at the hotel.

Our first full day in London was filled to the brim with traditional English sights.  It was about this time we started thinking that 2 days was certainly not long enough.
See other photos from my trip: Paris Day One, Paris Day 2 & 3, Exploring Dijon, Mustard Making in Dijon, France, Wandering Through Reims, and Champagne Vineyards in Champagne