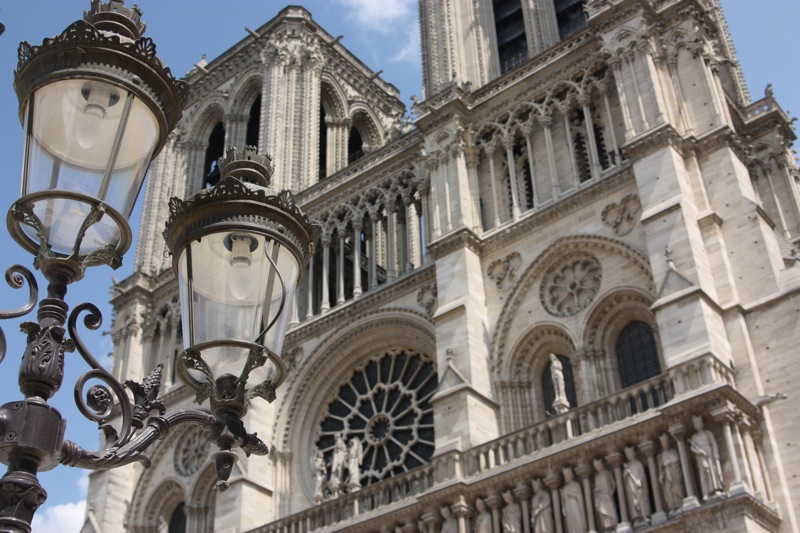 Well, Good Morning, Paris. You are looking quite lovely this fine morning.

Paris greeted us on our second morning with beautiful weather.  Literally, the vacation weather you can only dream of. After walking past Musee D’Orsay AND the Paris Catacombs Museum we’d seen only  lines that extended for what seemed like miles. …Ok, maybe not miles, but long enough that people waiting had opened bottles of wine which were being consumed straight out of the bottle… We
expected an excess of people in Paris since it is high tourist season but this just seemed ridiculous. We later learned that in the month of July and August Paris is the number one most visited location. Ooops. Well, we decided to wander by Notre Dame with little hopes of actually going in after seeing the lines at the other two places. But after passing by the Cathedral on the river cruise the night before we thought it a shame not to see “Our Lady” up close. We were pleasantly surprised to see that we could get inside the Cathedral in less than a 10 minutes wait.

The most amazing thing about all of the architecture in France- especially the Cathedrals- is the amazingly intricate detail.  It seems unfathomable that people would commit to building a Cathedral that would take longer than their lifetime to complete.

Inside Norte Dame is equally impressive.  But, I will say it wasn’t my favorite Cathedral in Paris (yes, I said it.) But the stained glass, history and prominence in the city, makes Norte Dame a must see.

Michael thought he’d get a nice shot of me with Notre Dame in the background, we were sorrily disappointed to see accordion man is stealing the show.

Close-by to Notre Dame is something called Lover’s Bridge, which now expands to most of the surrounding bridges as well. The idea is that you attach a lock to the bridge with a loved one and throw the key over into the Seine River, sealing your love forever. The idea is beautiful, but the spontaneous artwork it creates is even more breathtaking.

Time for a quick pick-me-up as we headed down the Seine toward the Eiffel Tower.

Some of the best window shopping in Paris is not the clothing, but the food.  Can you even believe these kabobs? That’s a jumbo shrimp, pepper, onions, a huge stack of mussels, a salmon filet and repeat. Is this real life?
We decided to browse through some of the local establishments to create a little picnic for ourselves to take to the Eiffel Tower.

We ended up with an abundance of cheese and bread… the “French Diet.”  Eating a picnic dinner under the Eiffel Tower is not a thing to be missed if you visit Paris.  I’d say it was one of the most memorable things we did.  Tourists, and locals alike, meeting under the symbol of Paris on a perfect summer evening.

The dogs alone were enough entertainment for the evening.  Did I mention yet that most of the dogs in Paris are off-leash?  They wander about making friends along the way and it’s some show to watch them all.  We laughed until we cried watching a fluffy little white dog who did NOT much care to listen to his owner but much rather preferred chasing after all the other dogs at the park.  He reminded me of my naughty little fur baby back at home, making me a little homesick.

On our third morning we caught up on the day’s events then quickly headed out for our final excursion into Paris before leaving the city.

We took the subway to the 6th Arrondissement and settled in for a French breakfast of coffee and a ham omelette.

Once in the 6th we hoped to do a little shopping but instead we were side-tracked by a number of beautiful Cathedrals.  They are literally around every corner.

By late morning it was time to make our way back to the train station to say au revoir to Paris.  We made our best attempt to translate the French ticket machines to purchase a one-way trip to Dijon.

It was mighty helpful to have such an attractive bellhop helping us along the way.  Next stop, Dijon.
See other photos from my trip: Paris Day One , Mustard Making in Dijon, France, Exploring Dijon, Champagne Vineyards in Champagne,  and Wandering Through Reims.

Don’t forget to follow me on BlogLovin.
If you have time, check my side bar for a poll, I want to hear your answers!
Check out the sweet feature Emily did of me on her Blog here
Follow along: Instagram // Twitter