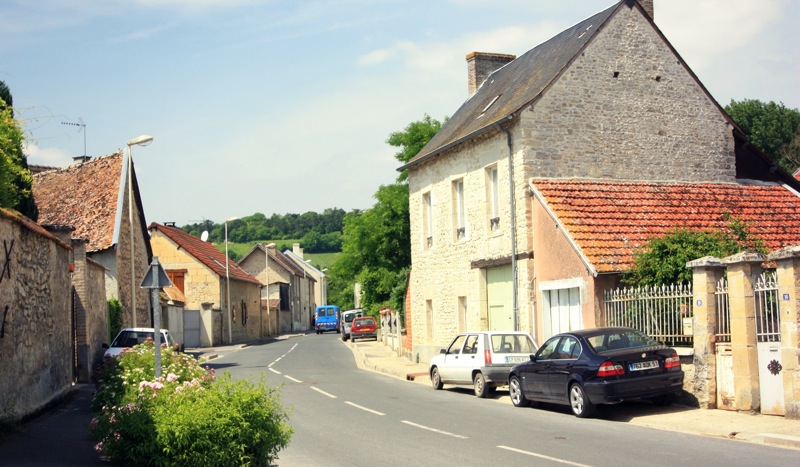 During our time in the Champagne region of France we stayed at a tiny little B&B in a town just north of Reims called Hermonville.  Hermonville was a sweet little town not a 15 minute drive from the city but it felt like light years away.  It boasted one pizza restaurant and a patisserie, both that had the quintessential “french” hours of being closed from 12h-19h.  In this tiny town, tourist like us stuck out like sore thumbs and people gave us sideways glances everywhere were went.

La Grange en Champagne, the B&B we stayed at, is owned by a very pleasant Dutch couple who spoke superb English.  They also own a shop on premise called La Grange aux Couleurs which sold pretty home and garden items and also doubled as an art space where the owners held painting lessons.  While the rooms lack the modern amenities such as air conditioning, (or a curtain over the bathroom window… I had to strategically place a towel when I wanted to take a shower), and came with a pair of roosters who let you know of their presence around 6am when they decided it was time for the world to wake up, it made up for all of that in charm.  The rooms are very large, complete with a sitting area and dining/office space.  And every morning the host lays out a breakfast spread for you with croissants, baguettes from the baker down the road, fresh honey and homemade jams.  After spending five nights as city dwellers the quaintness of this little B&B and the town of Hermonville was a nice change of pace.

When we arrived in the early evening and plopped down in the outdoor patio for a glass, or two (or three), of Burgundy wine, which we’d picked up on the drive.

When we awoke the next morning we feasted on our breakfast spread and spent a little time meandering about La Grange and walking the streets of Hermonville.

Completely on accident we stumbled onto the Hermonville Military Cemetery.  It’s message and homage was quite touching and it reminded us that on these charming little streets and beautifully sprawling farms many men lost their lives during the first world war.

The neatest thing about the cemetery was in the back there was a tiny little door.  Michael scolded me when I went to open it, but inside was a visitor’s book with all previous visitor’s names and comments.  It was pretty special to read through some of the people who’d sat at this same tiny cemetery in this same tiny town.
It also included some information about the soilders buried here.  It stated that it was established “During the First World War to mark and maintain the graves of members of the forces of the Commonwealth who died in that war and to build and maintain memorials to the dead whose graves are unknown.  Its duties were extended to include the dead of the Second World War….The work is founded upon the principles which have remained unaltered; that each of the dead should be commemorated individually by name…that the headstones should be uniform; and that there should be no distinction made on account of military or civil rank, race or creed.”

I can’t complain too much about the heat, we were blessed with blue skies our entire vacation, but, it was pretty darn hot out… We got lost between the discovery of the war memorial and our B&B and I finally gave into my stubbornness and flipped on my phone’s GPS and let it lead us back to la grange.
We rewarded ourselves with another relaxing moment in on the patio, this time enjoying some champagne we’d picked up the day before at G. Tribaut Vineyard. (If you missed it you can enjoy the beautiful views from G. Tribaut here)

This is the professional way to open Champagne, FIY. The scrunching of the face into this pleasant flattery is very important.

Michael had been eyeing a beer called 1664 since we’d arrived in France.  The beer in France, I’m afraid to say, is not very good.  We are spoiled in the states with amazing microbreweries.  Now, I shouldn’t go out on a limb and just accuse the French of making bad beer, perhaps we were just ordering the wrong ones.  But, the beers we sampled were light and, at times, painfully sweet.  Not really my cuppa tea.
Anyways, I discovered later that Kronenbourg 1664 has indeed been produced in France since 1664, having a brewery in Strasbourg since 1850.   It clearly couldn’t hold a candle to a good micro brew but it was, thankfully, not sweet, and Michael lovingly named it “the PBR of France.”

After a little relaxing and champagne drinking we jumped into the car and headed Southeast past Reims to the town called Villers-en-Prayeres and to a little place called Coelacanthe.  Apparently carp fishing is a thing around these parts, like a BIG thing- seriously, you should have seen the pictures of the monsters they were pulling out of these little ol’ lakes.  A sweet elderly couple ran Coelacanthe which was a restaurant, campground and fishing spot.  We went because our wonderful host at la grange promised it was a nice place to relax and drink a glass of wine. It didn’t disappoint.

My favorite part was the resident German Wirehair Pointer.  His face greeted you out the front window of the restaurant when you pulled up and when you came around the patio he pranced outside to carefully inspect each person.  It was like a right of passage, he had to accept you into his domain.  Having passed his test, we grabbed a table with a view and got chatting with the owner, her with her broken English, and myself with my broken French. She explained to us about how her husband and her were retiring and had just sold the whole estate to a young lady.  They’d built the place from the ground up and were “tired” and ready to take a break.
And will the dog go with you? (chien aller avec vous?) I had to know. No, she replied He will stay here, this is his home. Lots of tears.

Just look at that sweet little face.  He dutifully watched us and other guests as we ordered and ate our dinner.

Much like many of the restaurants we happened upon in France, the wine list was pages long while the menu was a few items scrolled across a blackboard.  Unfortunately for Michael, tonight’s dinner – from what we could get with our best broken French- was fish, lamb and beef tartare.  Luckily, there were small plates and I ordered him this amazing salad topped with fresh feta, prosciutto, figs, eggs and olives.

I went for the fish, gathering that it had been fresh caught right out of a local pond.  The fish was beyond delicious along with the homemade noodles.  I was pretty disappointed by the overcooked mush that was my peas and carrots though,  such a let down when everything else was so amazing.
Either way, we left happy and full and hopped back into the car to go to Reims for the lighting of the Reims Cathedral- we heard it was not to be missed.

We took a wrong turn and ended up taking the long way to get there but it was easily one of the most beautiful drives of my life.  For 50 minutes we curved on small, French, countryside roads that wound through farmland and every 10 minutes came to a tiny town that looked like it was straight out of the 19th century.  The sun was making it’s slow descent which shone that beautiful golden glow on everything.  Blissful.

We made it to the Cathedral just in time to grab a spot to watch the light show.  We weren’t quite sure what we were in for, but it was quite a spectacle.  For 20-25 minutes a light show was projected onto the facade of the Cathedral depicting the Cathedral’s history.

I was just about speechless at how they could create something so marvelous with just light!  I stuck a few little clips of it below for you to see, but let me tell you no video, let alone my cellphone video, does this show any justice.  If you find yourself in Reims, get yourself to the Cathedral around 23h.
//www.youtube.com/get_player

Goodnight world’s biggest hot dog, you sure were great.