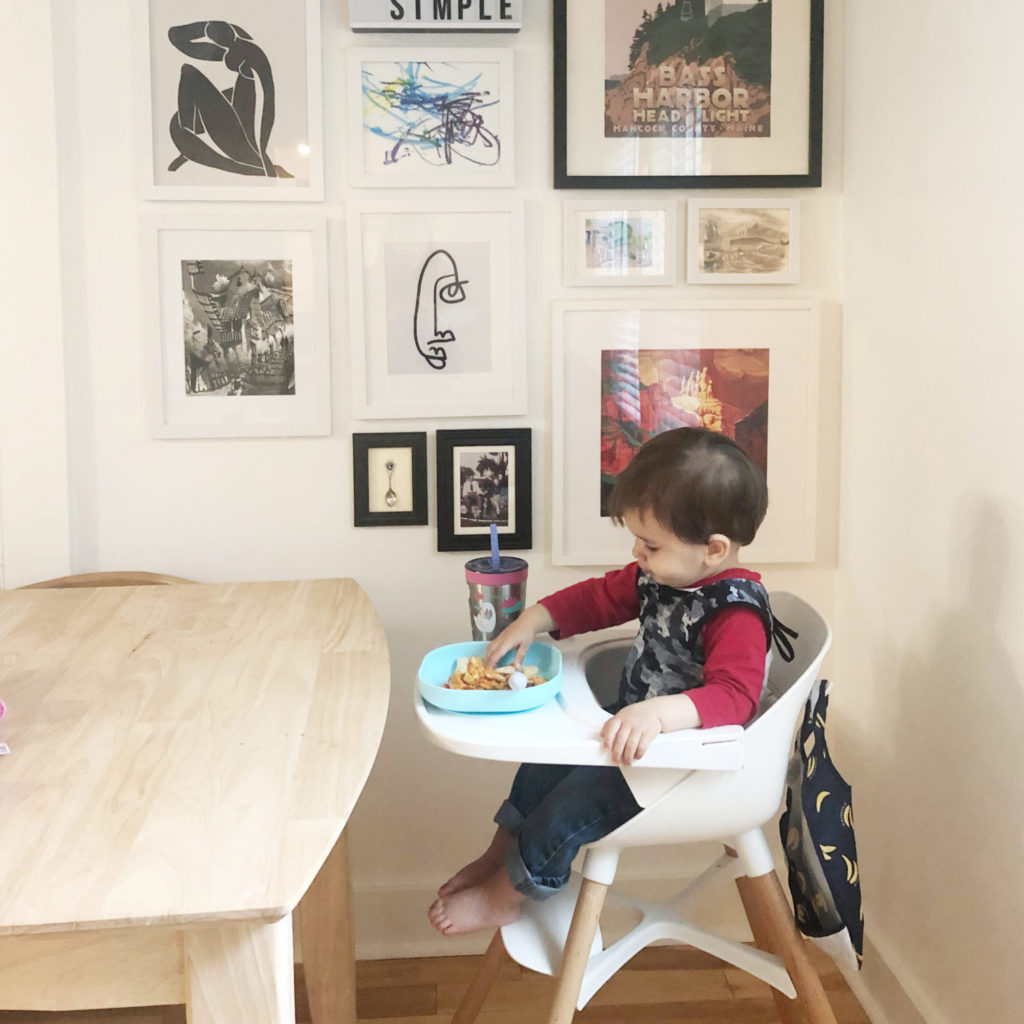 The Best Tips I’ve Learned For Helping My Toddler Eat

One of the biggest toddler-related requests I get is to share more of what Miles is eating. I’ve always been relatively hesitant to share a lot because, honestly, as a new mom I feel like I’m just figuring this all out myself. It feels hard sharing about something I’m still learning about too.

But, the more I chat with you guys in messages and comments, the more I see a need for some transparency when it comes to feeding toddlers. I don’t think there is any other topic I’ve seen that women give themselves MORE mom-guilt over than eating. We stress that…
…they aren’t eating enough, they are getting too much salt, not enough fiber, too much sugar, not enough protein, they aren’t good at sitting in their high chair, our friend’s kid is a better eater, they don’t always want to use a spoon, they are picky, they throw their food, we’re doing something that is ruining their eating habits, they don’t like vegetables, the neighbor’s kid eats so much healthier, they only eat the same 5 things…
…you get the point.

There are A LOT of things we have to worry about when it comes to feeding our kids. And, I’ll the first to admit I’ve probably worried about almost all the things on that list at least once. So, I wanted to just get honest and transparent with you guys all about toddler feeding and share some things I’ve done in our home that’s made toddler feeding feel A LOT less stressful for me.

THIS IS THE FIRST AND MOST IMPORTANT ONE.

We all think other kids eat better than ours. And, I believe strongly that’s because many people aren’t always honest about their toddler’s eating habits (due to their own mom guilt.) So, we don’t always hear the truth about what’s happening day-to-day in other parent’s homes. So, we assume all kids are better eaters than ours.

You’re not failing if your kid eats the same dinner for 4 nights in a row. You’re not failing if they didn’t touch a vegetable all day. It’s not your fault that they are a picky eater. Hold on….let me repeat that last one, IT IS NOT YOUR FAULT IF YOUR CHILD IS A PICKY EATER.

I wouldn’t consider my toddler a picky eater, but he’s also not overly adventurous. I’d put it somewhere in the middle. But I’ve still spent time worrying he’s not eating enough variety or I’m doing things to negatively impact his eating habits or he’s not eating meat or doesn’t like enough vegetables…or just about any other food-related worry you want to enter here. Once I allowed myself to LET GO of that worry and give myself grace feeding him, it instantly became EASIER.

I think we’ve all heard before that a toddler needs to see something many times before they will try it. And it’s true. I can’t tell you how many foods Miles has refused or spit out before he willingly ate it.

Scrambled eggs are the perfect example. Personally, I eat scrambled eggs almost every day. Miles has never ever liked them. I have probably offered them to him almost every week since he was 8 months old and just in the last few weeks (he’s 21-months old now) he’ll now willingly and happily eat them. That’s about a year of trying!

Now, most often it doesn’t take that long. But, the point is, even if your kid has refused something 15 times, don’t give up. Just keep offering it. Even if they don’t eat it, just the general exposure to the food helps. Seeing a certain food, touching a certain food, even putting the food in their mouth and spitting it out are all steps to eating the food.

I think one of the hardest balancing acts of feeding toddlers is wanting them to eat well and wanting them to fill their bellies. This is why we so often fall back on their tried-and-true favorites.

So, the trick I always use is when I make Miles a plate I focus on putting on something I know he’ll eat something I think he’ll eat, and something he’s never eaten before (either new or he’s always refused). This way I know he’s eating something and filling his belly, but I also know he’s getting the much-needed exposure to new foods. Even if he doesn’t touch them, he’s seeing them and being exposed.

I know sometimes it’s hard to find new and different things to expose them to. If you’re like me, you might have your own eating habits you fall into. Like I told you, I eat scrambled eggs every day. I tend to eat a lot of the same thins over and over. So, I do try to make sure I’m bringing new foods in for Miles so he can have chances to try new stuff.

I use a few different sources I like to use get new things:

Don’t forget about the power of just changing the way you serve a certain food in order to get your little one to try it or eat it. Going back to my scrambled eggs example, prior to eating scrambled eggs alone, I started offering them in a wrap with some cheese, avocado, and ketchup. Miles LOVED these little egg burritos and it was exposing him the egg flavor and consistency, and I’m sure it’s why he now will willingly eat scrambled eggs. Sometimes they just need a “bridge” between foods.

So, some ways to consider serving something different:

Once again, I’m going to bring the egg example back. The first few times Miles willingly ate scrambled eggs alone was off of my plate. Toddlers are naturally curious about what you’re eating. It’s why parents always joke that they never get to eat a full meal (because their little ones steal half of it.) HANDS DOWN the most efficient way I’ve found for getting Miles to try something is by eating it in front of him. Even if he doesn’t like it, he tries something 8 times out of 10 if I’m eating it. As opposed to it just being something new on his plate which maybe has a 2 out of 10 chance he’ll try it.

If you want your little one to eat something, eat it in front of them, a lot.