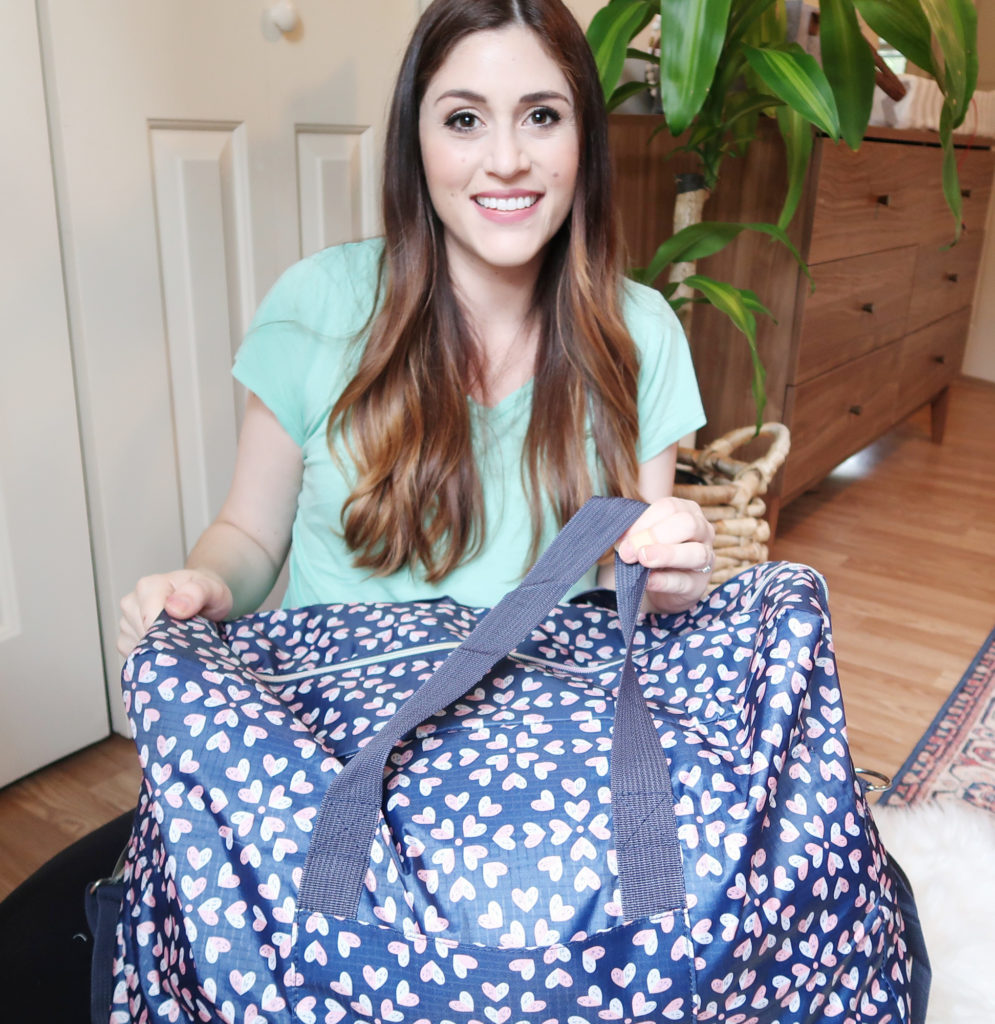 What’s In My Hospital Bag? 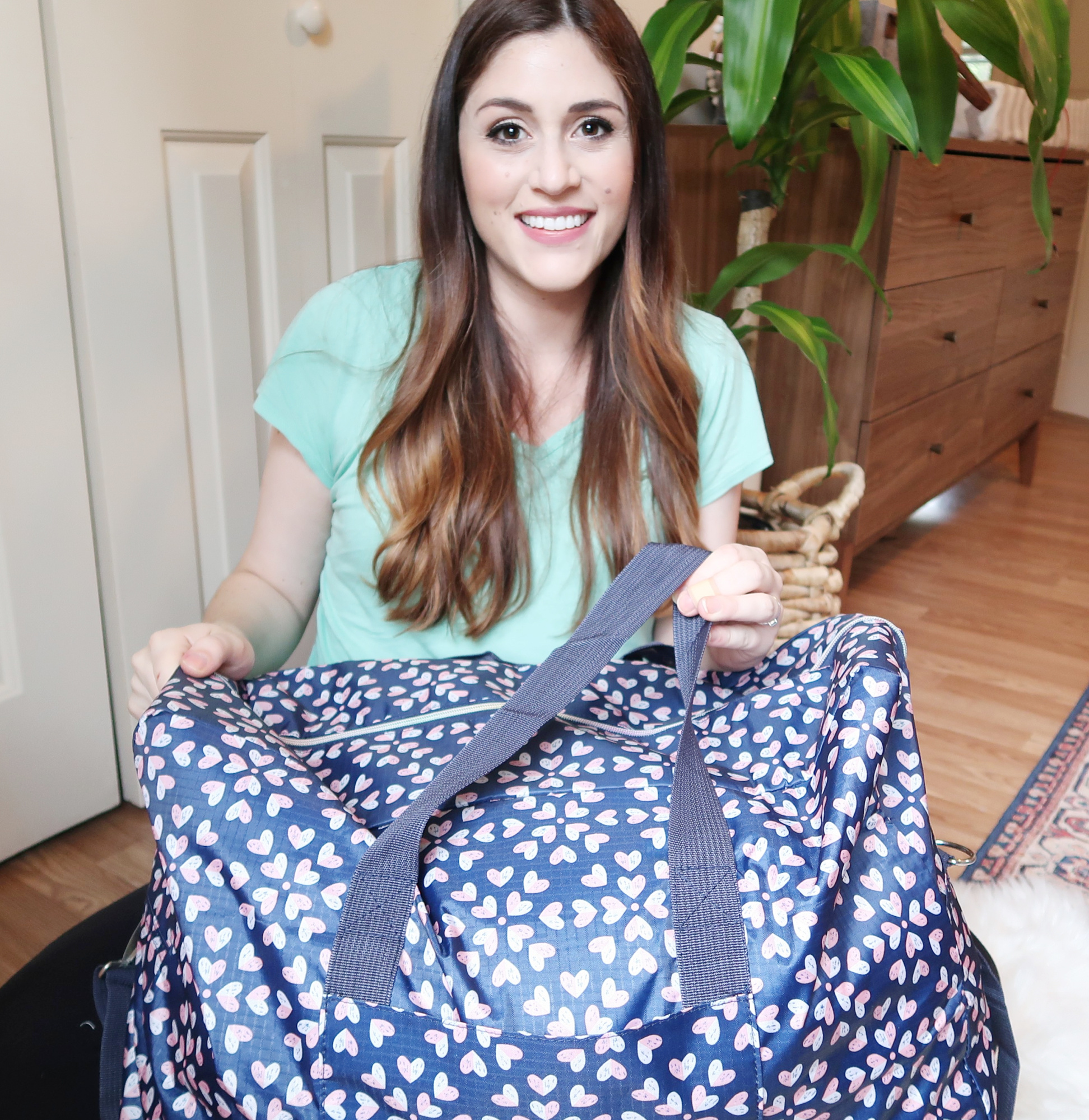 I asked you all on my Instagram Stories what pregnancy posts you’d like to see and a peek inside my Hospital Bag was highly suggested! I was a little surprised because there are so many posts out on the internet about what to pack in a hospital bag. But, I also get it. I love reading what other people pack, too. Everyone does it a little different and it’s good to get inspiration for when you pack your own!

Now, I’m clearly no hospital bag packing expert. This will be my first time going through it and so I don’t EXACTLY know what I’ll need and won’t. BUT, I have gotten A LOT of advice and have done A LOT of research on my own to decide what I want in my bag.

I think it’s important to note that when it comes to your hospital bag, some of it is going to be personal. Like with pretty much everything in your pregnancy, just because people tell you that you “HAVE TO HAVE” something, doesn’t mean you really do. What is important and necessary to you is different than what’s important and necessary to someone else. Like I said, I read a lot, talked to a lot of people, and pick and chose what made the most sense for ME and for Michael.

But, because of this, I’m also going to include a section at the bottom with things people suggested I bring that I decided not to, just to give you some more things to think about when packing your own bag. 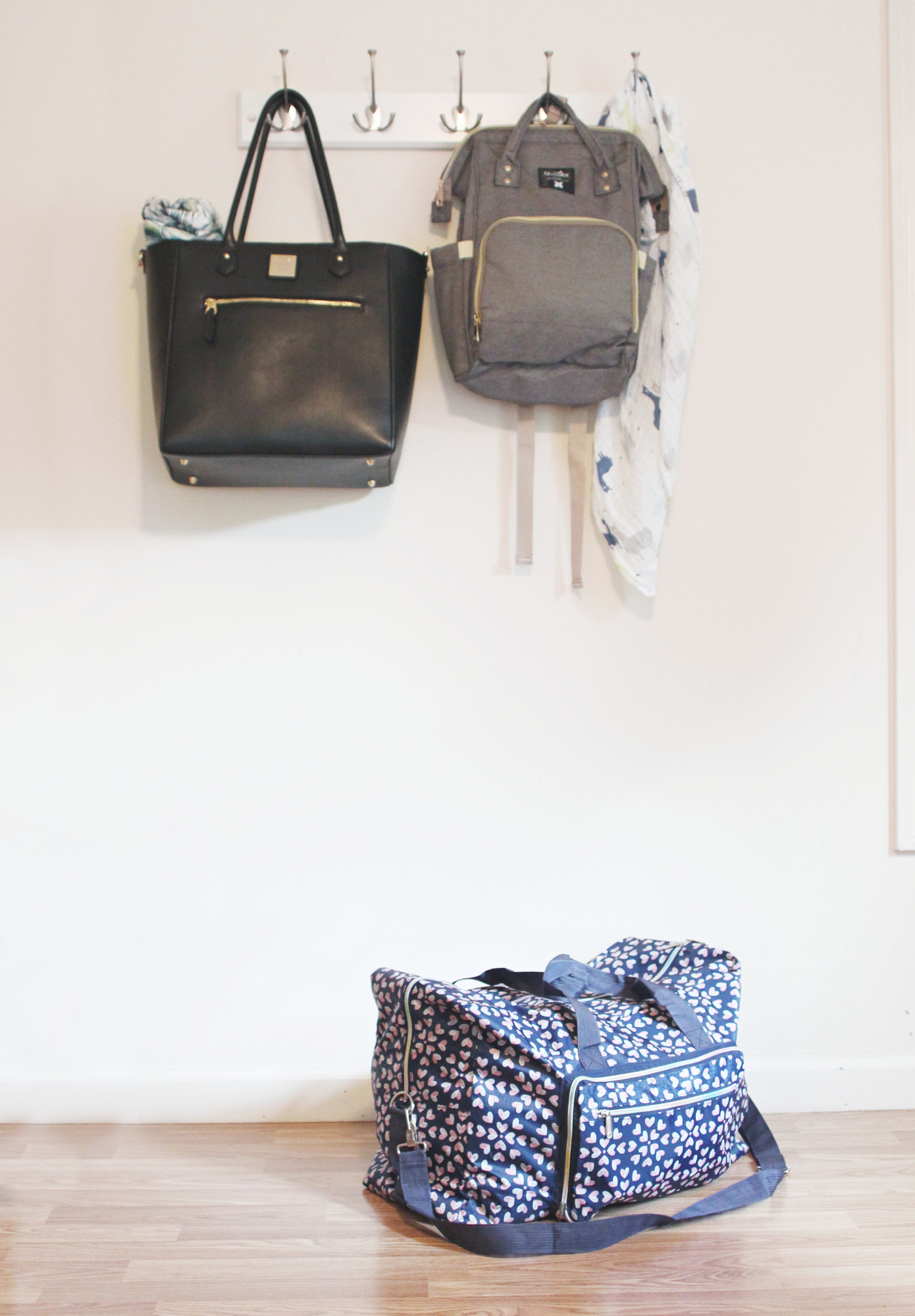 Ok, so first things first, you need a bag. I actually ended up buying one because I didn’t have a bag that was the right size. It was either a small over-night tote that was too small, or I could pull up to the hospital with a full-size suitcase. I figured a duffle bag would be something I’d use in mom-life too.

I ended up getting this bag from Amazon because it wasn’t too big or too small, and the price point was just right. I’m not an over-packer by nature and so you’ll see I mostly stuck to the basics. There are things I HAVE to have with me, but I hate having more than I need. If you are someone who prefers to overpack, you might want to opt for something bigger. If you’re even more of a minimalist than me, you could go smaller. 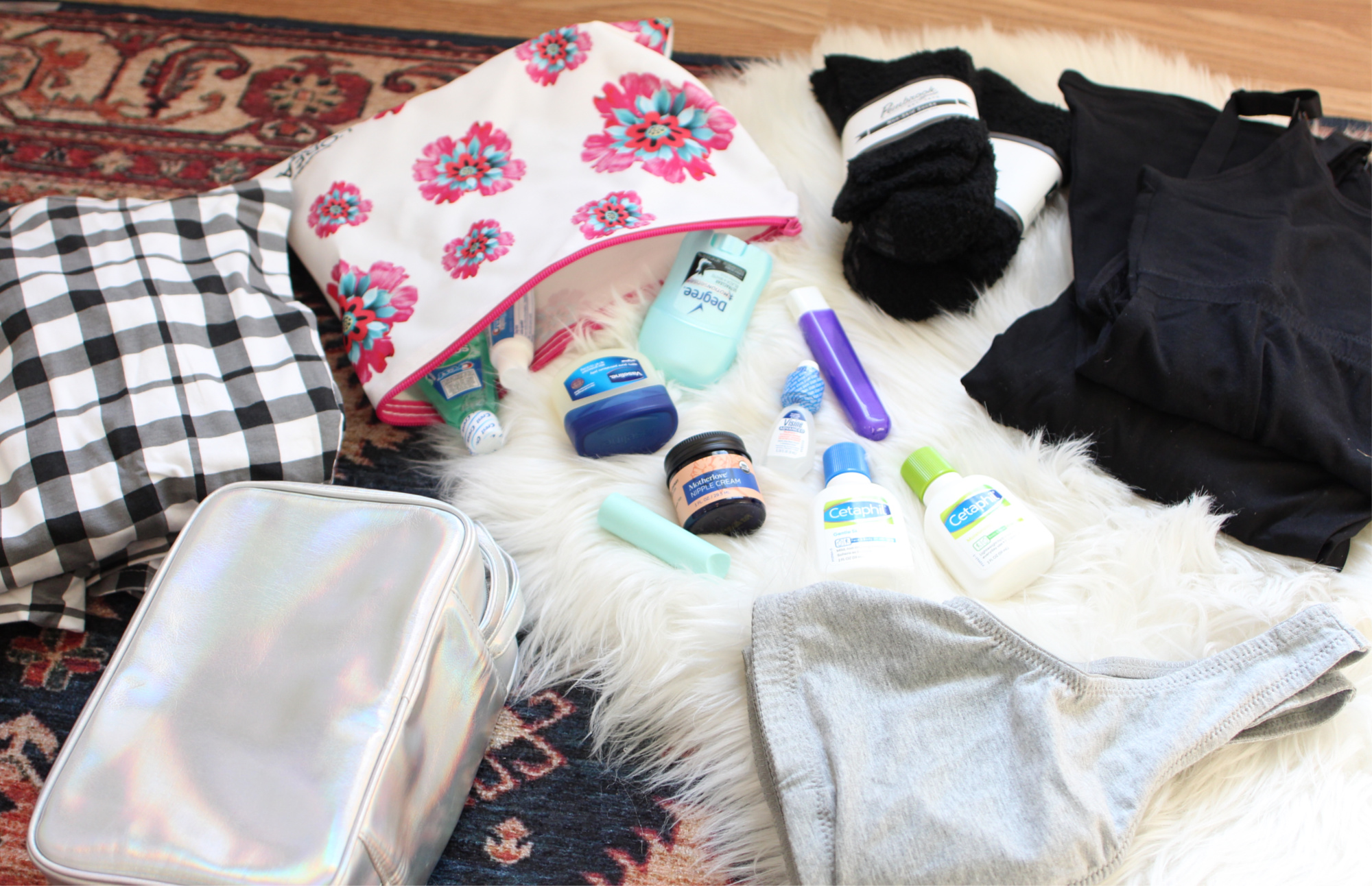 What’s in my Hospital Bag: For Mom

A lot of people tell you that you’ll be in the hospital gown the entire time, others will strongly tell you to bring your own clothes. Again, this is where the confusion and hypocrisy of the hospital bag comes into play. Do what feels right to you. I assume I’ll be in a gown during labor and initial hours of recovery. But, knowing myself I will want to change afterward into something more comfortable.

Listen, I’m a snacker. This was brought on partially because I’m hypoglycemic so my blood sugar can drop if I don’t eat. But, truthfully, I don’t like to go into any situation when I don’t know when my next snack will be (especially labor). When I heard that very often you don’t get to eat after labor until the next meal is served I had visions of delivering baby boy at 10pm without food in sight until the next morning. Not gonna cut it for me. I packed a box of Cliff bars just in cases. 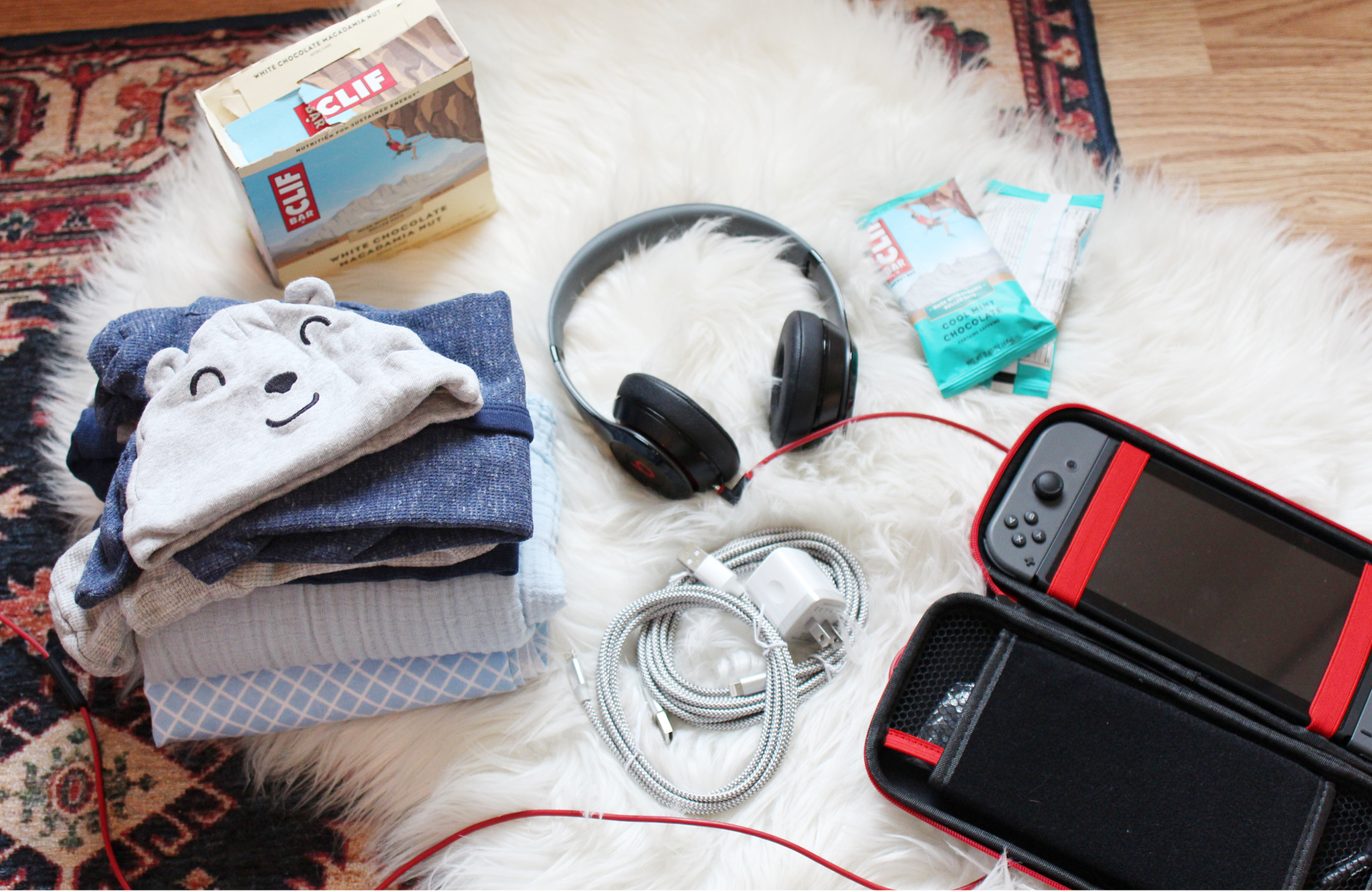 What’s in my Hospital Bag: For Dad

Don’t forget about dad when you pack your bag! Sure, he’s not going to need as much. But, he is likely spending 2-3 days in the hospital with you, too. Michael packed:

What’s in my Hospital Bag: Tech and Other Gadgets

What’s in my Hospital Bag: For Baby

Most of what I read/heard said that the hospital will have pretty much everything you need for your baby. So, I didn’t overpack in that department.

Pillows: A few people said to bring your own pillows because the hospital ones suck. Personally, I could sleep on a cheap throw pillow so lugging some big old pillow with me seems pointless. But, if you’re picky about pillows, I can see how this would be helpful.

Your breast pump: A good friend told me to bring my breast pump so they could show me how to use it in the hospital correctly. I thought this was a great idea! But, I don’t plan to pump until at least 4-5 weeks, and my hospital offers a breastfeeding support group 1x a week I plan to attend. I figure instead of lugging my pump in with me during delivery when I won’t be using it right away, I would instead bring it to one of these support groups when I’m ready to start pumping.

Camera: I’m perfectly happy with cell phone pictures in the hospital. I mean, the cameras on our cells are pretty impressive in this day and age. But, if capturing labor/delivery is something really important to you, then bringing the high-quality camera would be worth it.

Exercise Ball: Women rave about these for pregnancy, inducing labor, and to use during labor to work through contractions. I never bought one, mostly because I have no idea where in my house one would fit. Our hospital also has them available for you to use, so I knew I could probably get one during labor if I really wanted it.

Depends/extra thick pads: Things will be leaking for a while if you catch my drift. I skipped these, again, because our hospital told us they have these things in stock so I knew I wouldn’t need them. But, if you’re not sure, I would imagine you might thank yourself later if you have a few extra in your bag.

Ok, friends! That does it for my hospital bag! Again, like I said, packing a hospital bag is personal. And, I’m no professional at it by any means. But I hope you still enjoyed taking a sneak peek inside what we’re bringing.

Now….just to wait for the little man to arrive. Due date is in 8 days (but who’s counting?) Will he come early or late?! I have no idea. If there’s not internal mom intuition I’m supposed to have, I don’t have it. Half of my is CONVINCED he’ll come the weekend before and the other half is CONVINCED he’ll be so late I’ll have to be induced. It’ll probably be neither of these.